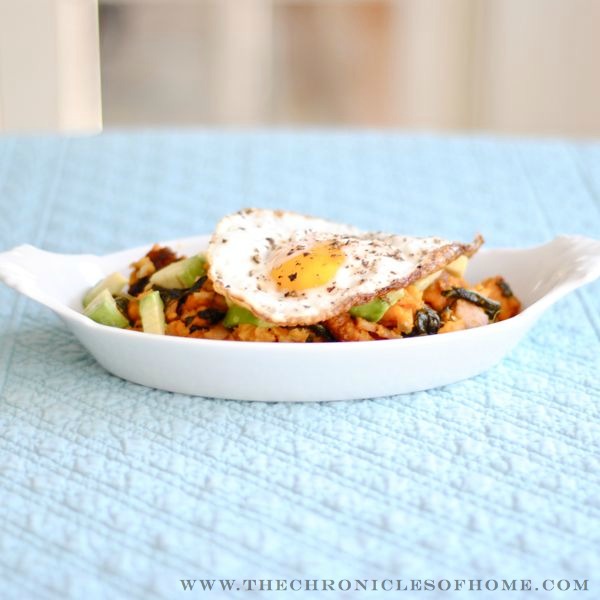 When it comes to breakfast-for-dinner I’m definitely more a fan of egg dishes than pancakes or waffles.  This hash is so flavorful and satisfying it almost makes me forget that it’s a traditional breakfast dish rather than a “real” dinner.

I use a nitrate-free Canadian bacon, which is a nice staple to keep in your fridge.  It’s a lean meat, already cooked, and can be chopped up and thrown into any number of dishes or just warmed and served alongside some pancakes.

A fried egg on top with a soft yolk and crispy edges is the perfect finishing touch.  You may find yourself making this for breakfast and for dinner!

Stir in Canadian bacon, onion, mustard, and horseradish.  Cover and cook until the sweet potato is tender and the bottom turns golden, about 8-10 minutes.

Flip sections of the hash and press down with a spatula.  Cook uncovered another 8-10 minutes, flipping sections occasionally so hash browns evenly.  Stir in arugula and cook a few minutes until it wilts.

Meanwhile heat olive oil in another nonstick pan over medium-high heat.  Add eggs and cook until whites are set but yolks are soft.

Divide hash among four plates.  Top each with ¼ of the avocado and one fried egg.  Serve immediately. 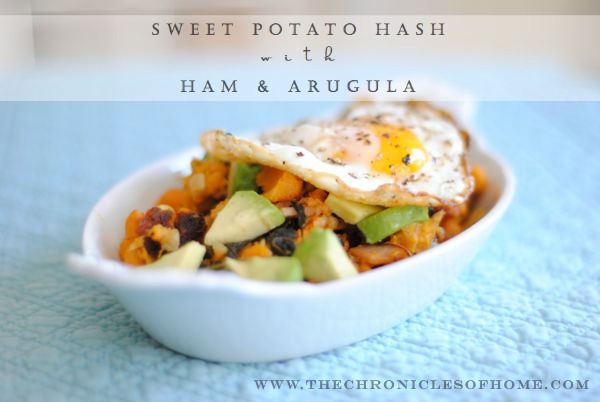