Last week, Better Homes and Gardens came to my house.  I still feel like I should be saying, “Haha, just kidding!” after that statement, but someone pinch me, because unless I’m dreaming and still haven’t woken up, I’m going to be on the “I Did It!” page of the October BHG.

You can read all about how calm and cool I was when I got the news HERE, and also my wardrobe musings HERE.  Today I’m giving you a recap of the day with carefully edited photos – I’m not supposed to give away much of the final shot, but I’ll be doing a guest post over at BHG once the magazine comes out and will share the rest of my photos then.

The day of the shoot, I woke up around 7:00 a.m. and set to work applying makeup and doing my hair.  Both of these things rarely happen in summertime, and I can’t say standing under a hot hair dryer in my un-air-conditioned bathroom was the highlight of the day!

My stylist for the shoot, Kris Kennedy, arrived around 8:30 and started unloading props and bags of West Elm wares.  She came with a bucket full of flowers and set them up in the downstairs bathroom, where I’d hung all my wardrobe options.  I loved Kris instantly.  She was stylish, friendly, efficient, and just so much fun to watch. 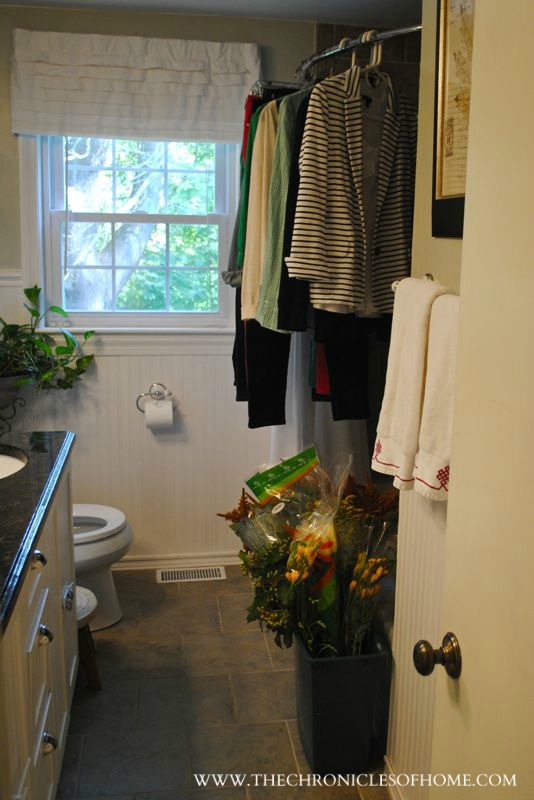 I gave her a house tour and then she said, “I’m just going to sit and think a bit now.”  So while she cerebrally sat in the living room, envisioning the final layout, my girls and I ate steel cut oats and smoothies in the kitchen with my mom, who had flown up the night before from Philadelphia to help me with Ada and Ellie and just to be there for the excitement.

David Land, the photographer, and his assistant, Matthew, arrived shortly after this and that’s when the gear really started piling up.  I had been asked to clear some space for props and equipment, which I did in the dining room, and it very quickly started filling up with black bags. 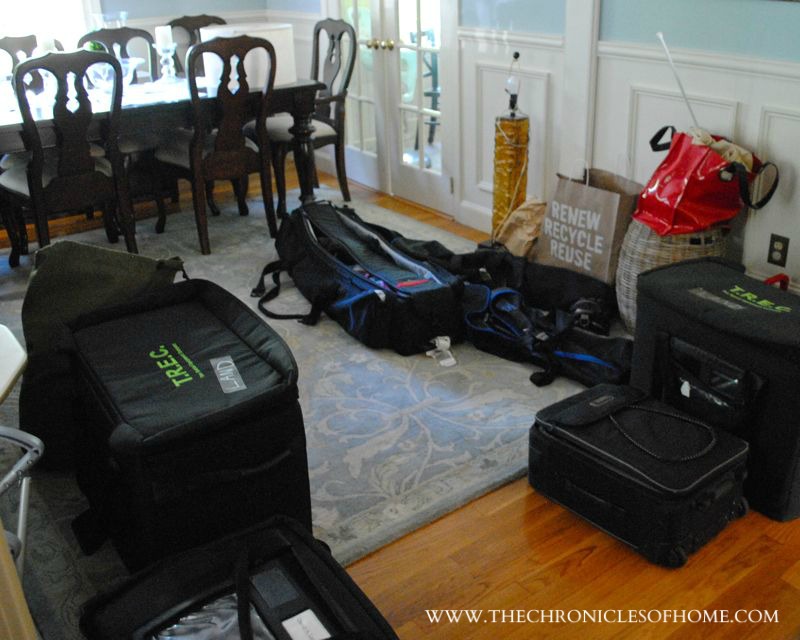 David and Matthew decided to set up shop on the screened porch, across from the sofa, and that’s when things really started moving along. 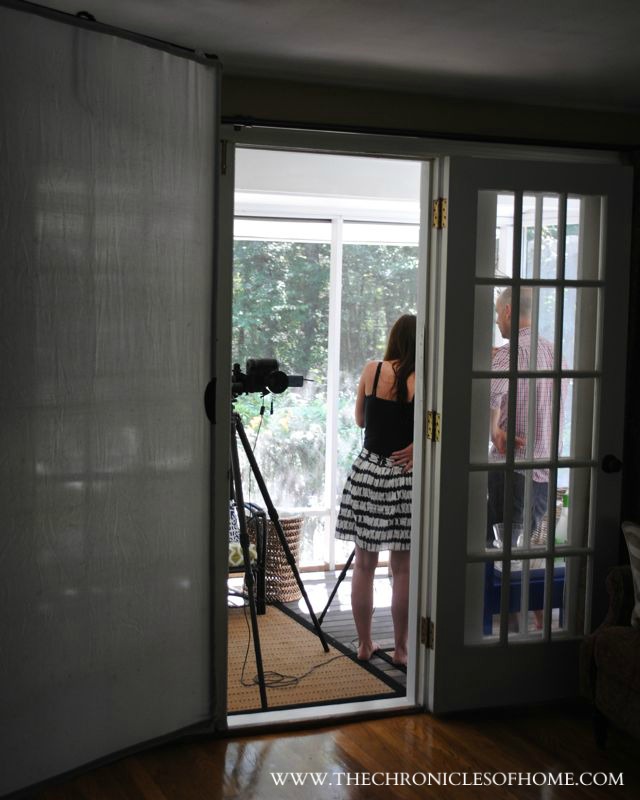 The room was pretty well emptied of furniture, the rug was moved, the sofa shifted, and Kris flitted around the house, carrying in tables, mirrors, accessories, framed pictures, working her magic to frame the perfect shot.

David and Matthew set up photography equipment that I can’t even name because I don’t know what it’s all called, but there were dark screens and white screens in the living room, on the screened porch, and outside the house in front of windows.  David explained that it’s all about controlling the light to get the perfect even balance of shadows and highlights, which explains why my photos never, ever look as perfect as magazine photos.  Also, perhaps, the fact that I have no actual photography training other than what I’ve studied online.  Perhaps. 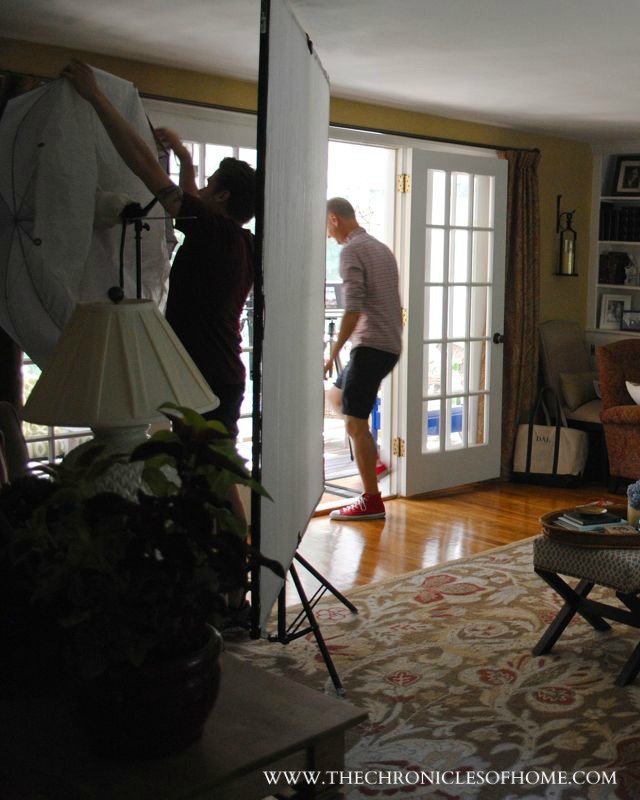 When it came time for wardrobe selection, Kris pulled out her favorites, handed then off to David, who held them up discerningly in front of the sofa, and then handed me a few pieces and said, “I think this is it, let’s have you try these on.”

I came down in the selected outfit, promptly started sweating, because by this point it was nearing 90º in the house, got the thumbs up on the clothes, and shortly thereafter the snapping began. 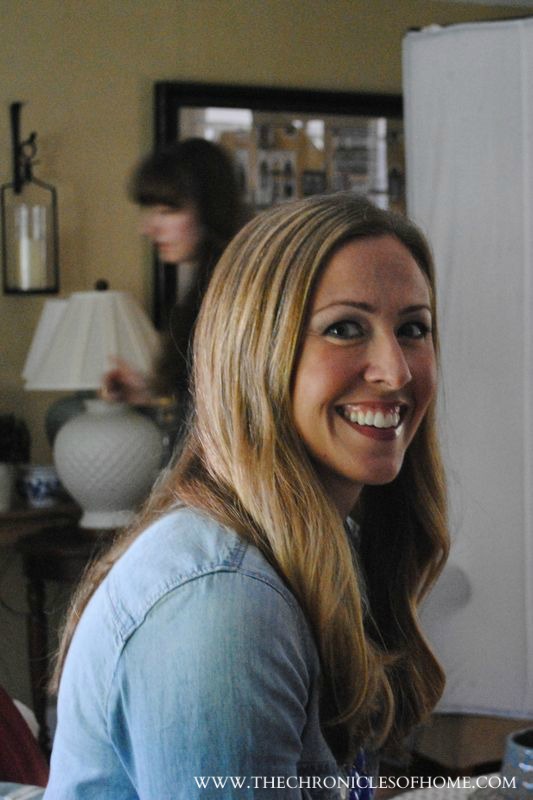 Kris and David were so, SO much fun to work with.  They had this hilarious little banter over my hair, which was not holding up exceptionally well in the heat – David would say, “Can you fix that?” to Kris, who would come over and smooth or fluff something, David would snap one shot, then walk over and smooth or fluff something and say, “She doesn’t know what she’s doing.”  All so good natured, though – they’d worked together before and had a very casual, fun, playful repoire. 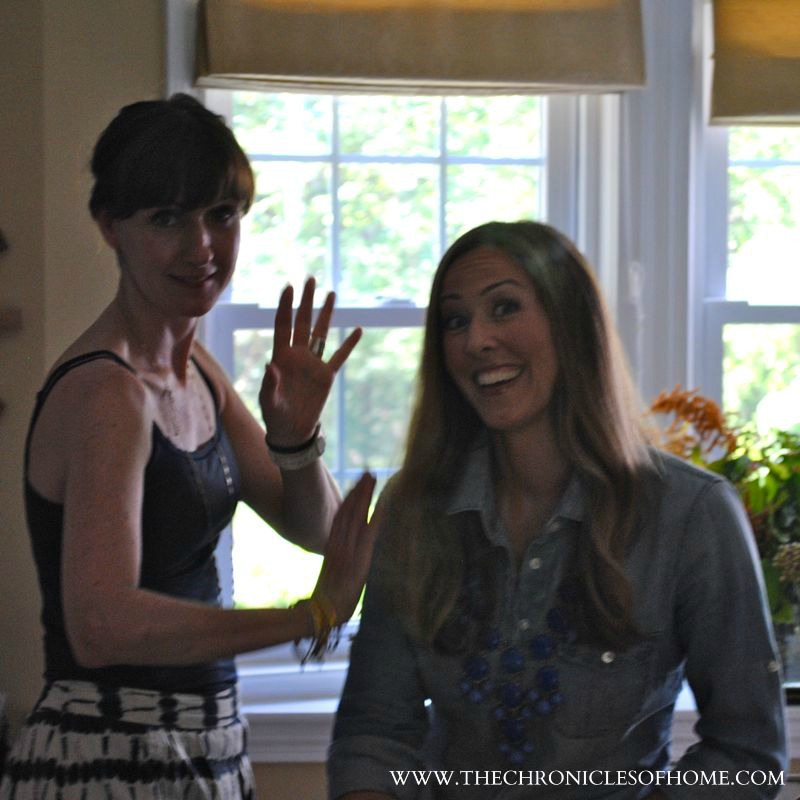 Then David would start his, “Okay, we’re smiling, we’re smiling, gorgeous!  Gorgeous smile!  You’re happy!  Yes, I made this sofa, no big deal.  Move your head a little bit this way.  Close your fingers.  Not that much, you look like you have Barbie hands.  And now we’re laughing, HAHAHA!!”  By which point I would actually be laughing and showing what felt like A LOT of teeth, but David and Kris promised not to submit any particularly horsey pictures of me for final approval.

They’d stop every now and then, send one of the shots off to “Iowa” (BHG Headquarters), wait for feedback, and then continue on with little adjustments.

I was slowing melting in my fall clothes but they assured me I didn’t look sweaty, just “rosy.”  I did feel bad that Kris had to keep touching me for little adjustments – she said she could feel the heat coming off of me at one point, and I said, “I feel really bad for you right now that you have to touch me.”  To which she very graciously replied, “Oh it’s no big deal, I can just feel that you’re warm.”  It’s very possible she was actually thinking, “Ew, this chick is sweating like a racehorse.”  But if she was, she never showed it.

I’m not sure how long the photo shoot went on…an hour or hour and a half I think.  But at one point, David said to Kris, “I think we’ve got it.”  And she said, “Yes, I think we do.”

So they gave me the thumbs up to go change back into summer clothes and pull my hair into a ponytail, which I did very happily and very quickly.  Kris, David and Matthew got to work putting the room back together and packing up their equipment.

They were all so sweet and kind to Ada and Ellie, who wanted to be a part of things and were very much underfoot.  Ada had her camera out and was snapping photos right along with David.  At one point she said to me, “Mommy, I want to take a picture of this so you’ll always remember it happened.”  I mean, seriously, how adorable is that?? 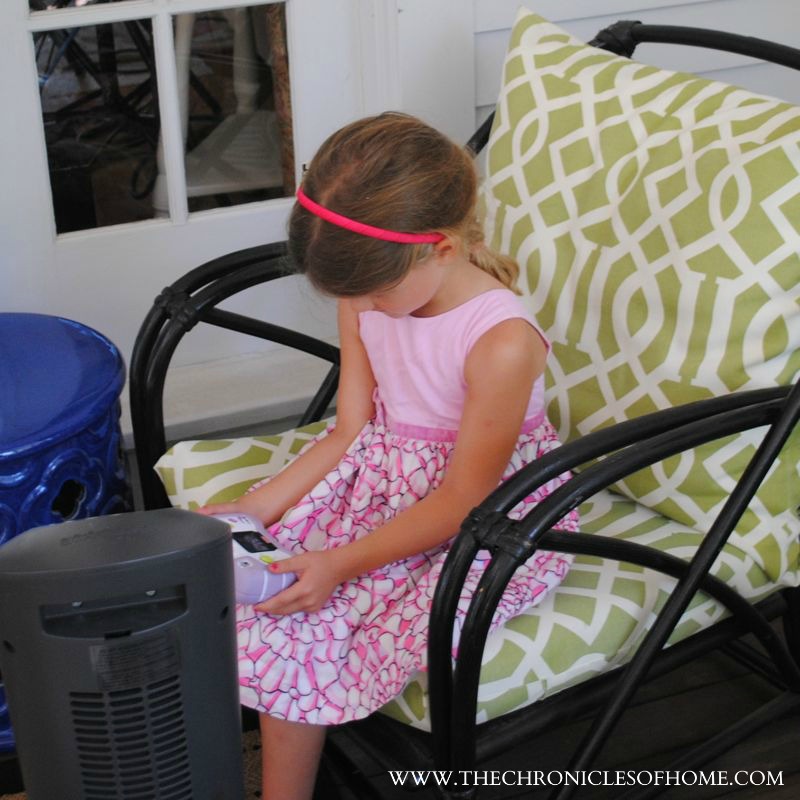 David let Ada hold his remote and take a bunch of photos at one point, and let her jump in the shot with me at the end and took photos of us together. 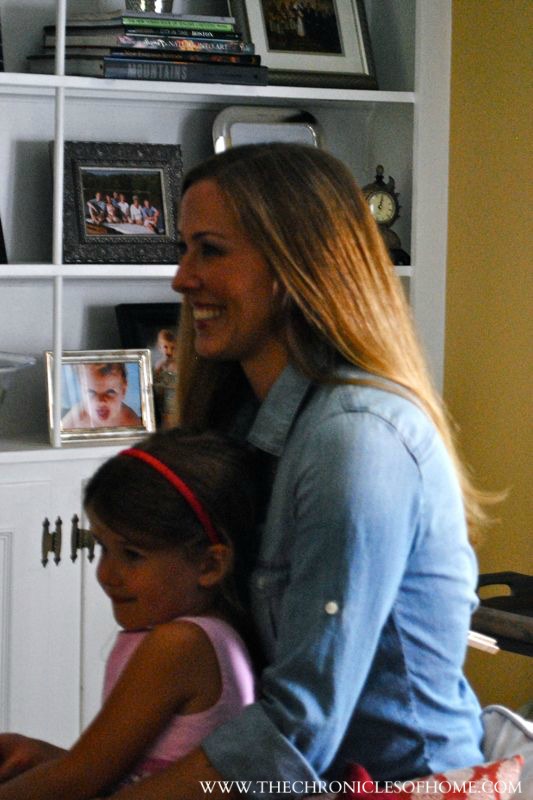 She perched next to him while he packed up his gear and asked a barrage of questions that he fielded like a pro.  Which he is, actually, he has two adorable sons (I saw photos) just about the same ages as my girls. 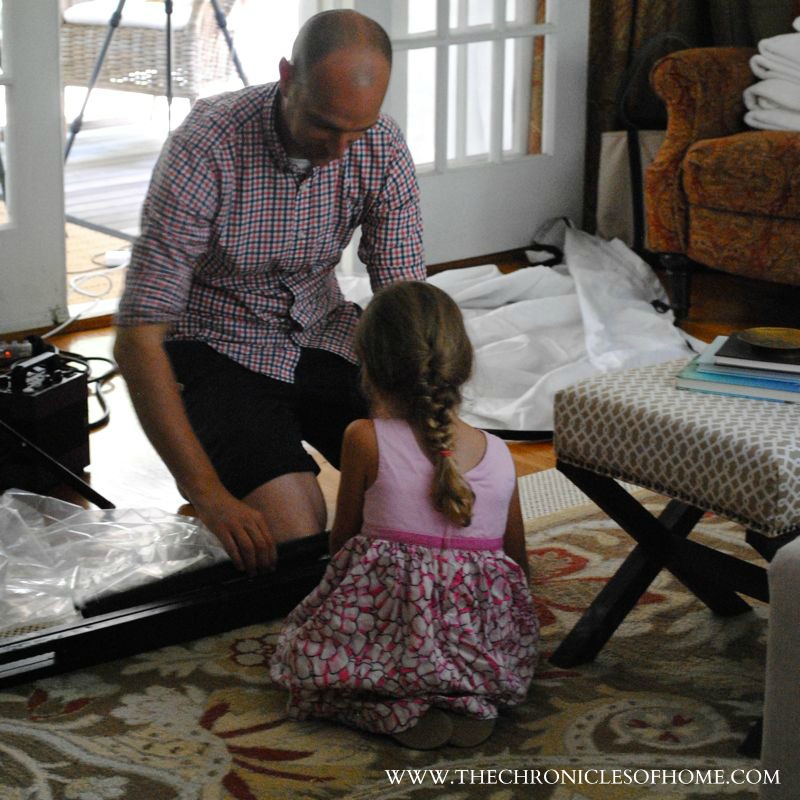 My mom took a photo of David and I before he left, and I swear, despite appearances, I am not naked! 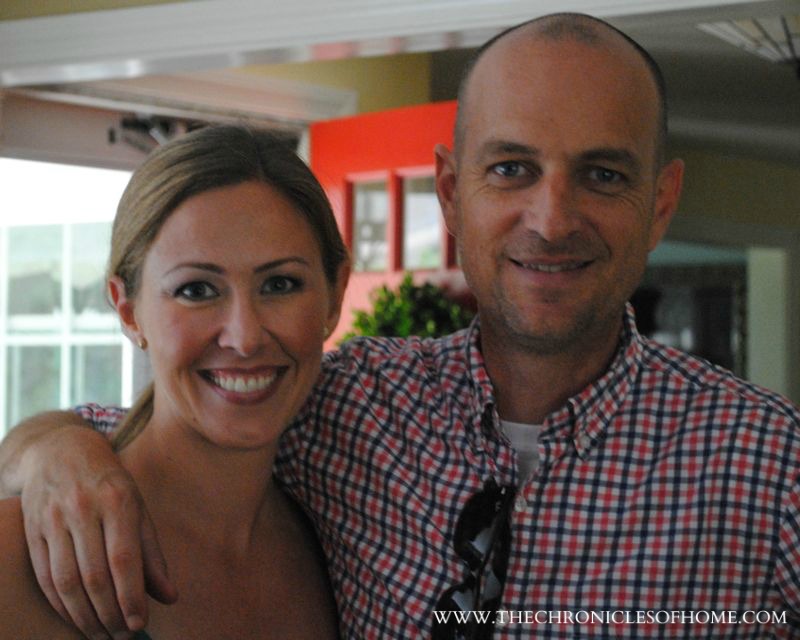 Kris tallied the receipts for her props budget, let me keep an armload of gorgeous accessories, then we got a photo of Kris and I, and they were all on their way. 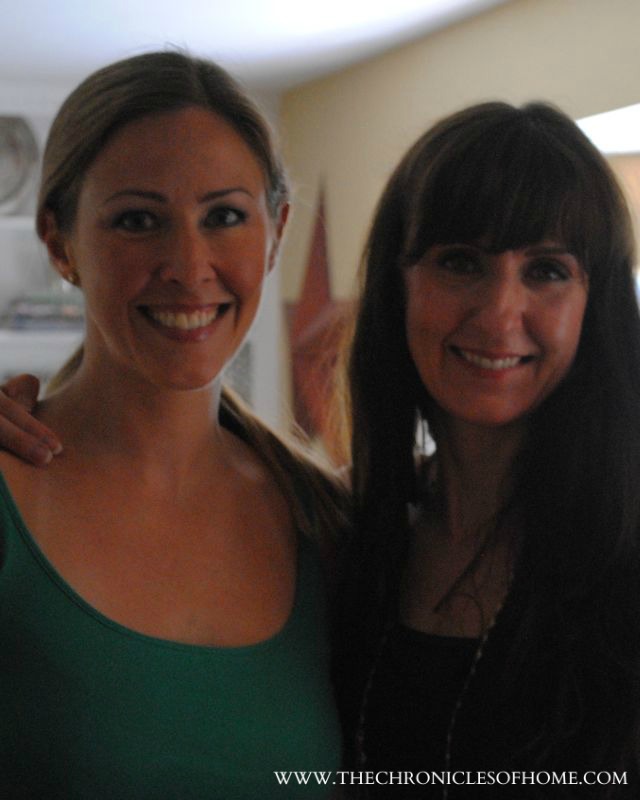 It all seemed so quiet after they left but I had this buzzy high going the rest of the day.

I can’t say I had really specific expectations before the photo shoot happened but it still managed to exceed everything I thought it would be.  It was just totally surreal, wonderful, fun, and I feel so lucky to have experienced this.

So now I wait!  Just like you, I don’t get a peek at the final photo and page in the magazine until it comes out in the October issue.  I can’t wait to share it with you!!