I am all abuzz thinking about projects I want to tackle this year. I have a tendency to hop project to project without finishing the one already in process all the way to the end, and I hope that prioritizing the big ones I want to finish this year will help keep me on track. Here’s a rundown of where I’d like to focus my energy in 2016. And prepare yourself – I am showing you some pretty ramshackle places here you have never seen before and even the spaces that aren’t completely run down are pretty messy. #reallife

Most people who come into our house come into the mudroom through the side door, not through our front door. So while the main purpose of the mudroom is to be a dropping place for our shoes and coats and bags, I would really like it to be as pretty and as organized as possible since it’s our most-used entry. The bones are great – lots of hooks, beadboard paneling, and a wall of built-ins that hold our shoes. 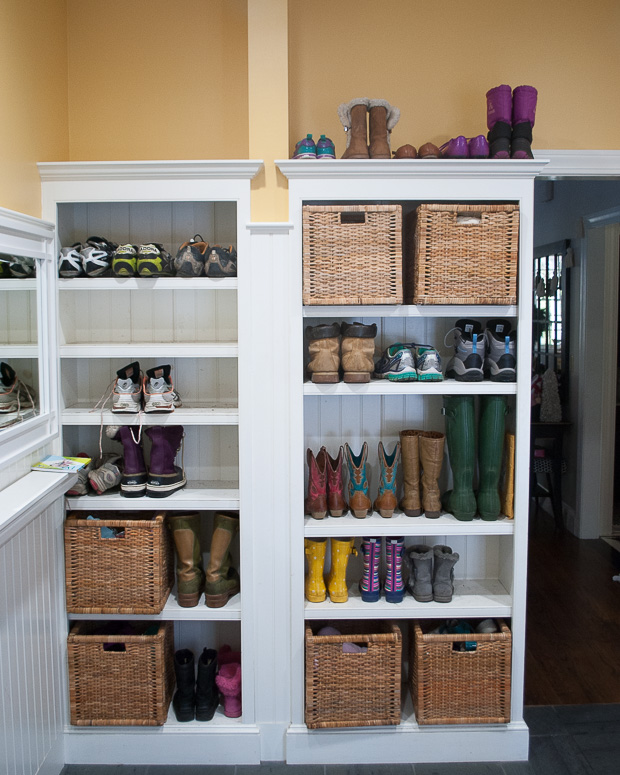 What I’ve found to be lacking over the past two years living here is visual organization. In the winter, when our coat and shoe use is heavy, the wall in front of you when you walk in is just a mess of coats (and apparently the odd princess dress). 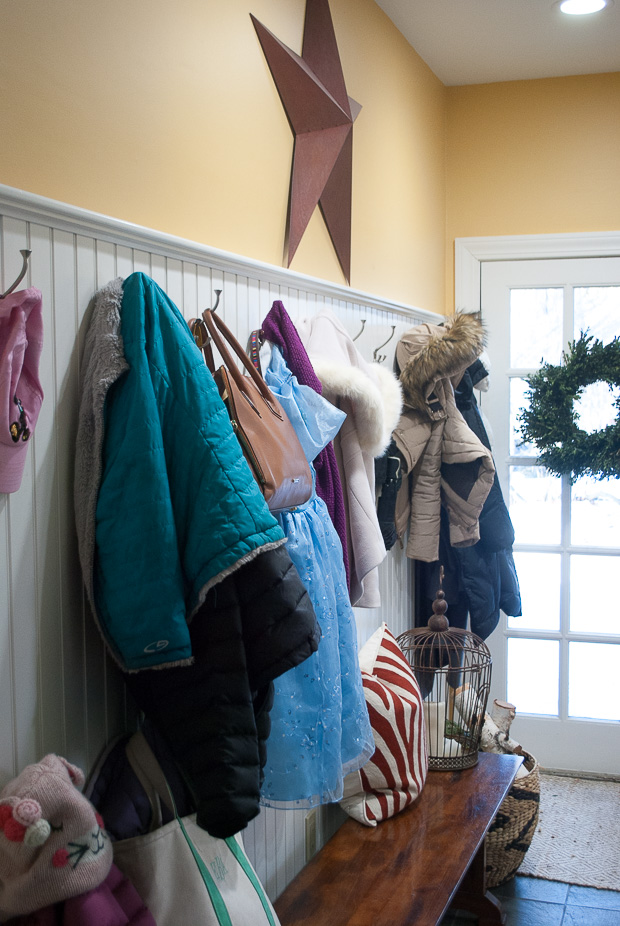 Traditional mudroom cubbies would solve this visual clutter problem but I can’t convert the whole wall to cubbies because of doorways on either side. What I can do, however, is add a shallow cubby section to the center of the wall, which will help compartmentalize coats and bags. The new built-in will include a bench for seating, shallow dividers, and possibly high cubbies for bags and other extras. 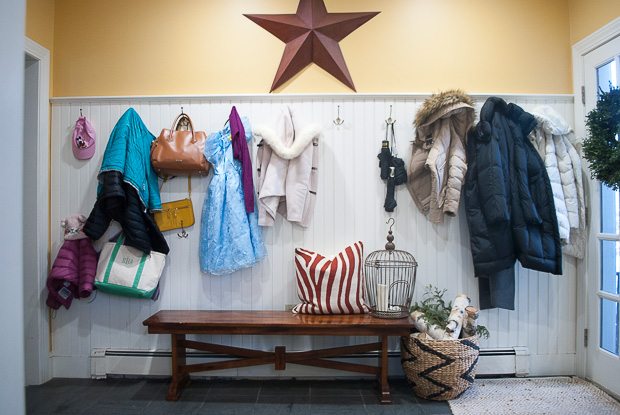 I’ve had wallpaper for the mudroom for a good year and a half and will finally get it hung once the new built-ins are complete. It’s this wide stripe black and white stripe wallpaper. The doors out to the driveway and the garage also need a fresh coat of paint, which I think I’m going to do in black. 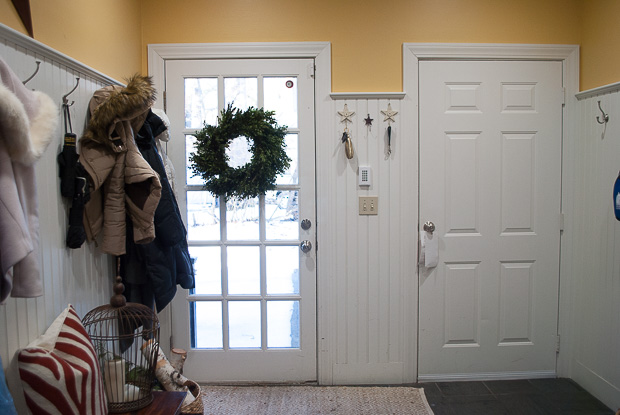 The updates to our kitchen have been happening slowly over the past two years, and they are almost complete. I made some changes in November and December that I’ll be showing you soon. There’s just one part of the kitchen left that I plan to update and that is the back eating area. 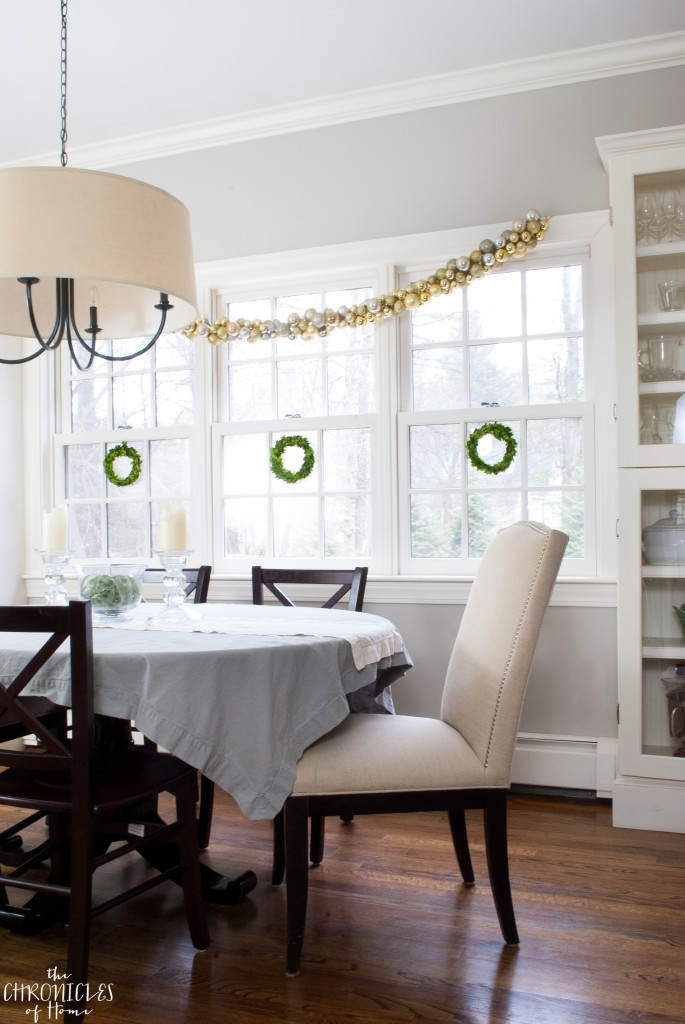 I’m going to add a built-in bench with a cushion under the windows between the two cabinets. I also want to build a new kitchen table that can seat eight. I’m picturing a farmhouse-style table with chunky legs.

The guest room has been about a quarter of the way done for awhile now. Don’t ask me why. It was one of those projects I started and then just…stopped. 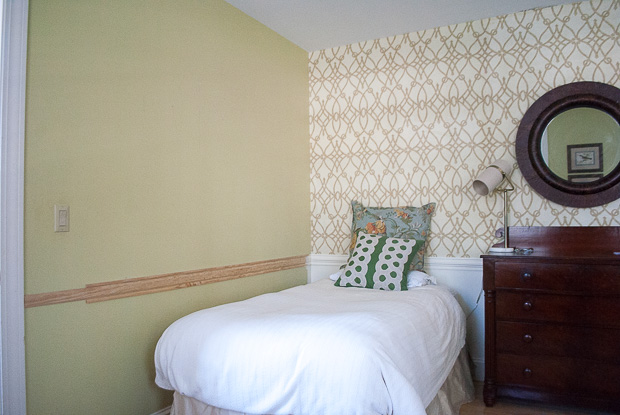 And I’m not in the guest room that often to remind me of its unfinished state. But I would love to get it done so our guests have a nice room to stay in. The plan includes headboards, new bedding, and finishing the wall treatment. 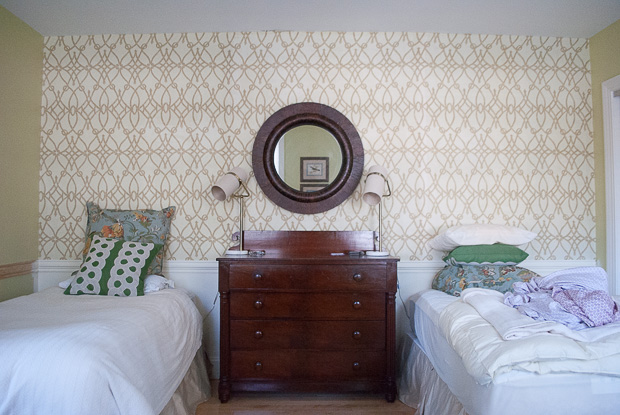 The guest room has its own little bathroom too and I need to make some small repairs in there as well – patch some wall holes and paint the mirror.

Oooooooh, the basement. This is the big one. I was so excited to have a big finished basement to use as a playroom for my girls when we bought this house. Then it turned out the basement had no heat. Which was odd for sure since it is freezing down there in winter. So we added a couple baseboards. Then it turned out that the door to the outside was leaking. We actually knew this from our home inspection but the leak was worse than we realized. So every time it rained the rug by the door was soaked. The air leak through the door was really bad too so even with the heat on, it felt like a window was open in winter.

So after half getting my girls’ toys set up down there, I wound up hauling the ones they play with the most up into the family room and the basement has sat like this for months. 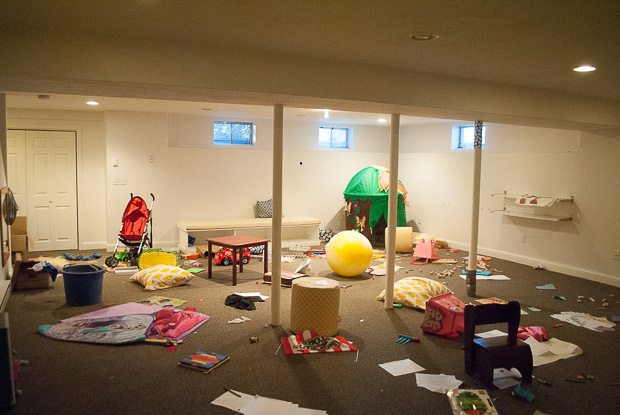 I have big plans for this room – rip the carpet up, install new flooring, fix the walls (there are holes everywhere), trim the support poles to look like columns, paint, update the lighting, possibly some built-ins…this is the BIG project I would like to get done this year. I’m still working out all the details but the finished space will serve two purposes for us – one side will be a lounge area with a sofa and TV and the other side will be play space for my girls. The first step has already happened – replacing the leaky, drafty door. 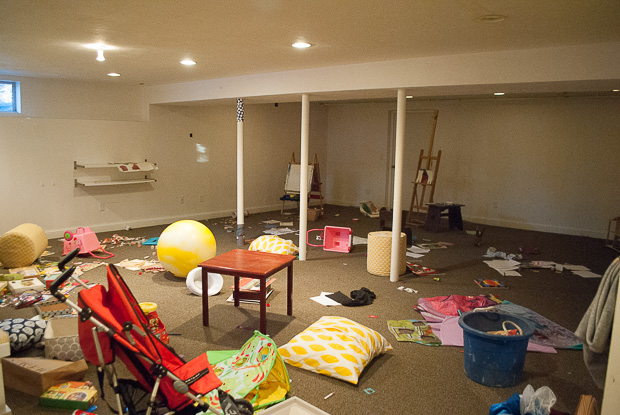 The next part is going to take a lot of time and work but I can’t wait to have the room usable. It bothers me to have it just sitting trashed down there when it has so much potential as a functional space for us. 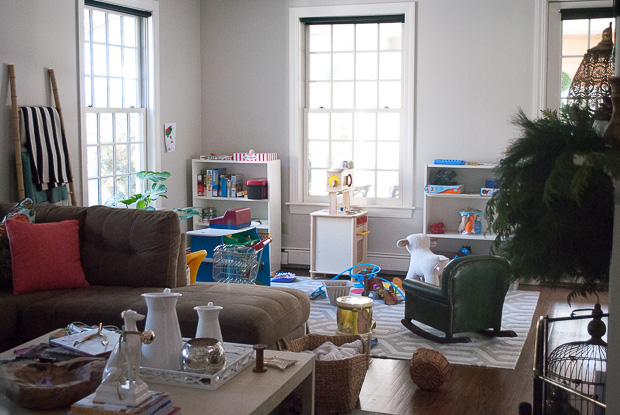 It’s been a bit of a mystery to me what to do with this spot, and I think I will leave it mostly open but would like to finish it, possibly with a window seat and a couple of chairs. We’ll see. Like I said, starting on this part won’t actually happen until the basement is usable again.

There will be some smaller projects in between but these are the bigger ones I would really like to check off my list this year. The only question now is where to begin!