As I mentioned Monday in my post about our master bathroom, our house only had one upstairs bathroom, a hall bath, when we bought the house.  One of the pieces in making the conversion to a master bath a viable option was adding another upstairs bath to serve as a shared bathroom for the other two upstairs bedrooms.

I came up with the idea that we could carve enough space from one of the bedrooms to create a bathroom, without making any significant structural changes.  The original layout of Ada’s bedroom was this: 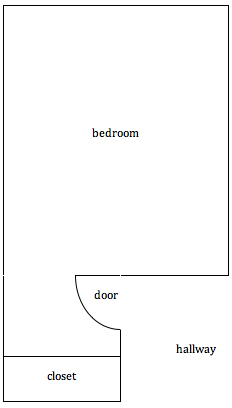 The doorway came in a bit awkwardly on the side into a narrow space with the closet at the back and then the room opened up into a larger are. When this became a slight issue, this gave us the idea of getting all the interior doors in the home uninstalled and have new ones put in place. The narrow space felt very separated from the rest of the room so it was the perfect little bit to steal away for a bathroom.  There was a heating vent in both the narrow area and the larger room area so we were all set there, and directly below the narrow part of the room was our coat closet, down the back of which we were able to run all the water lines we needed straight into the basement to connect with the other water pipes there.  Had everything not lined up just right, it would have been a rather expensive project so we were so lucky that it all came together so easily.

I designed the new layout and Scott and I chose all the finishes together but we worked with a contractor to move the walls and install the actual bathroom.  The new layout looked like this: 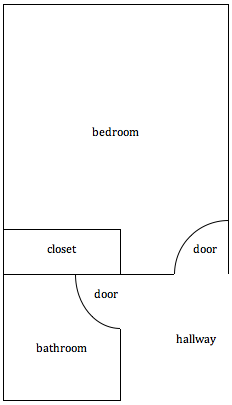 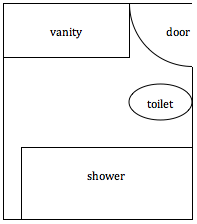 It’s a small room so we very carefully chose items that would maximize the space we had.  The white wood vanity was custom made to fill every inch of space between the wall and the bathroom door and give us as much storage space as possible. 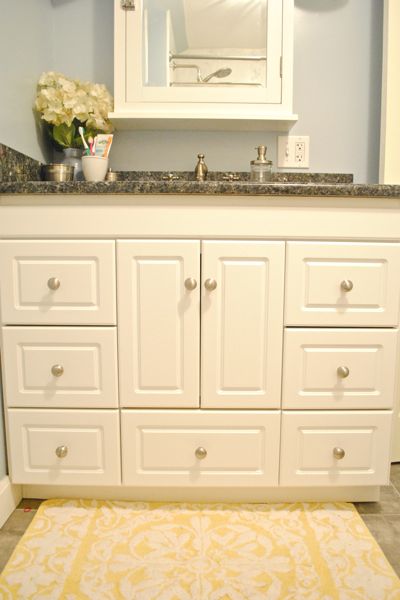 We chose a blue-grey granite for the countertop and brushed nickel fixtures. 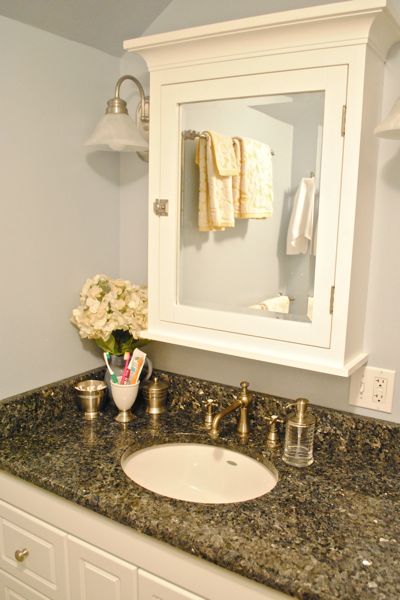 Restoration Hardware happened to be having a sale while we were going through this project so I got a great deal on the wall cabinet and lighting fixtures.  I love the graceful flare of the glass lampshades. 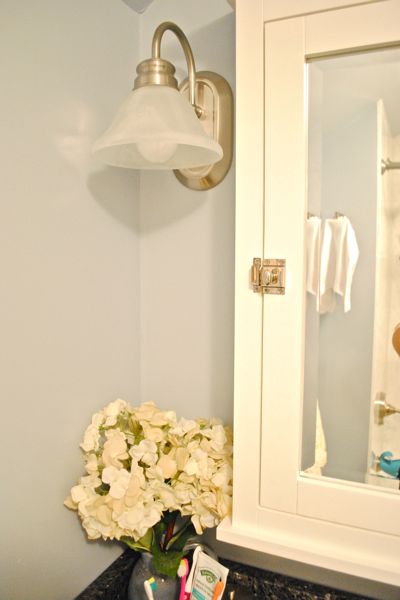 For the shower, we used the same white marble as in the master bath, but went with a more rugged, almost industrial-looking grey tile on the floors.  We bought two different sizes of the floor tile and puzzled them together for an interesting look. 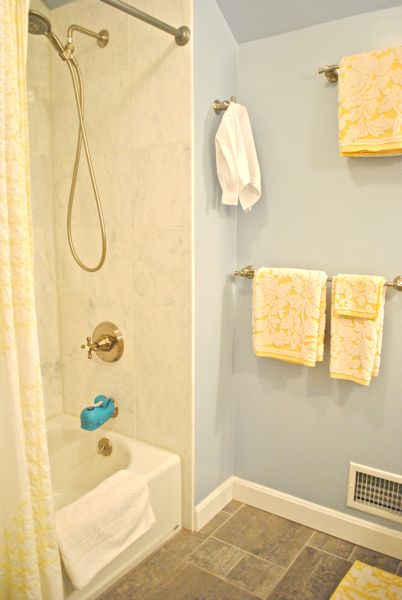 Along the back wall of the shower we mounted a glass shelf to hold bath and shower items.  I picked up the painting above the toilet (Mad Dogs by Jack Vettriano) on a total whim walking past an art store sidewalk sale in the Beacon Hill neighborhood of Boston on my way home from work six or seven years ago.  Its title apparently comes from a 1930’s song with the line, “Mad dogs and Englishmen go out in the midday sun.”

I couldn’t be happier with how the girls’ bathroom turned out.  The only change I’ve been thinking about lately is the wall color.  I never really loved it and I’ve been thinking that some crisp navy might be a nice contrast to the white of the marble and vanity and the perfect complement to the yellow in the towels and shower curtain.  I love how the navy and yellow look together in the playroom and also love the way the horizontal stripes came out on the walls there, so I’ve been considering doing navy and white stripes across the wall behind the towels.

I’ve also been sort of obsessing over this navy and white ikat stenciled wall since I spotted it and wonder if the bathroom wall could be the perfect place to try it out. 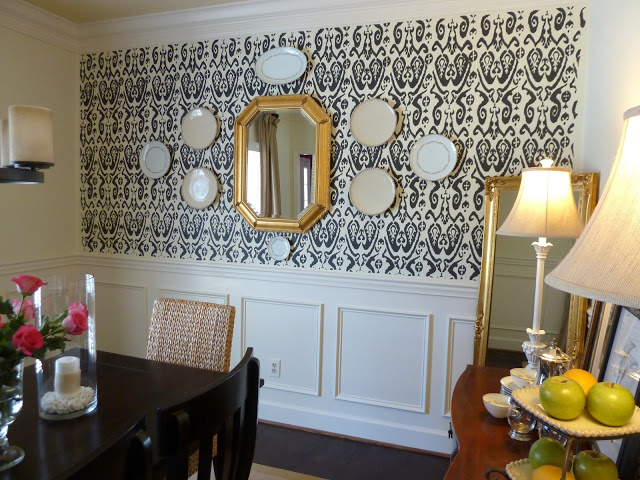 source
Can you see it on that bathroom wall?  Or are stripes the way to go?
For those of you waiting anxiously for the X bench tutorial, good news!  I expect to have it up Monday, so be sure to check back.
Happy weekend!
« Dining Room
Pasta »