Our house doesn’t have a fully finished basement, but does have a small room at the bottom of the stairs that had drywall, a nice built-in cabinet unit, and a carpet when we bought the house.  The previous owners had it staged as a playroom when we first saw the house. 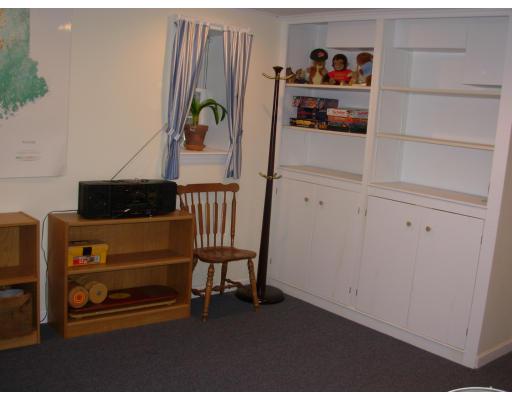 When we moved in we had no children but a treadmill, stationary bike, wicker chest, old sewing table, and lots and lots and lots of boxes.  So all of those things went into the basement room, and I think once you designate an area as “dumping grounds,” it’s just too easy to keep adding to the piles.  So over the next few years, in went my in-laws’ huge old TV, a few chairs we weren’t using, miscellaneous home decorations, either out of season or just not being used…and on and on and on.  In the meantime, we had two daughters who started accumulating alarming amounts of toys and playthings that we housed in our living room.  Thank goodness for the big built-ins there because they did help keep the room from looking totally overrun by toys, but after a few years, I was starting to feel like the living room was constantly a mess.  It’s the first room you see when you walk down the stairs in the morning and the first room you see when you walk in our front door, so I really wanted to do something to help keep it a little tidier and looking less like a romper room.
So I revisited the little room at the bottom of the basement stairs.  It was stacked practically to the ceiling with stuff and inhabited by a shocking number of spiders but I thought with a little elbow grease I could transform it into a special little space for my girls to play in, and on a pretty tight budget since I really didn’t want to spend much on this project.
First step was either purging or relocating all of the items in the room.  Once the room was completely cleared (part of this was rescuing all of our wrapping paper supplies from their jumble inside one of the cabinets), I got to work scrubbing the baseboards and vacuuming up the spiders and webs.
I painted the entire room, including the built-ins, a bright white semi-gloss I had leftover from another project.  I then marked off wide horizontal stripes on the wall across from the stairs and painted them pale grey, also left over from a previous project.  The stripes were a little tricky to do since both the floor and the ceiling are far from level, but I found that the most important parts are that the lower stripes match the pitch of the floor so furniture against the wall matches the line, and that the stripes at the top follow the pitch of the ceiling.  Then you very slightly taper the center stripes so they meet in the middle looking level and all the same width. 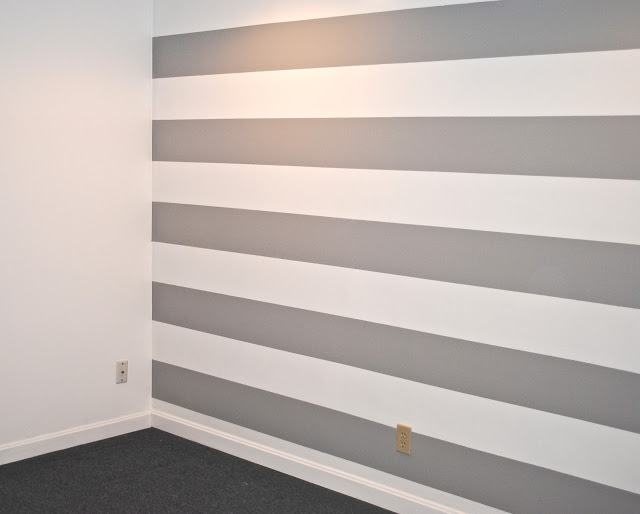 I wanted a large storage bench that would double as seating but couldn’t find anything that was as deep as what I wanted or was nine feet long.  So what do you do when you can’t find what you want and you’re working on a budget?  You build it!  I built the storage bench using cabinet grade plywood and some wood moulding.  I had the yellow and white striped cushion custom made at Outdoor Living Your Way, which was by far the cheapest option I could find, and only marginally more expensive than buying the foam and fabric myself.  The quality is great and they made and shipped the cushion super quickly. 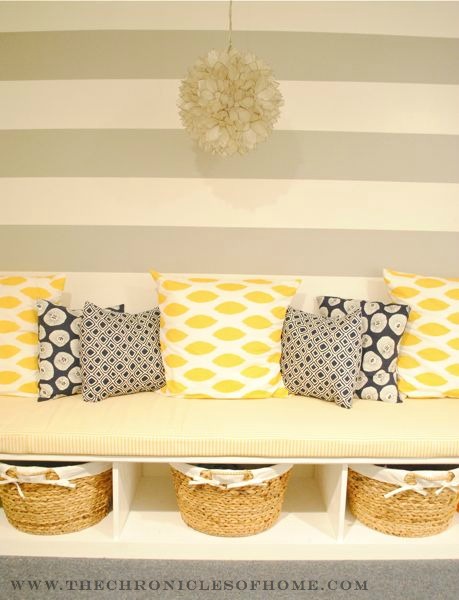 The storage baskets that best maximized the space I had in the cubbies were laundry baskets from Walmart.  We store mostly loose toys inside them.
The one thing in the room I sort of splurged on was the capiz shell pendant from Pottery Barn, though I got mine on EBay for about half the retail cost.  There is one petal that has the tiniest bend in it – completely invisible unless you really hunt for it – so this was a great score.  I absolutely love it, it’s hands down my favorite light fixture in the whole house.  Ada runs over to turn on her “pretty light” as soon as she goes downstairs to play. 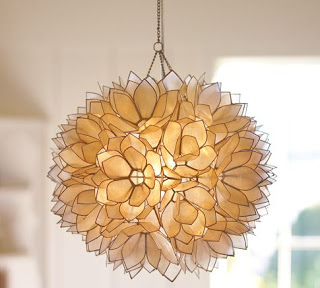 The little table and chairs set was $19.99 at Ikea.  Ada loves to use it as a drawing table and I think it will be great for both girls to play games or do puzzles together when Ellie gets a little older. 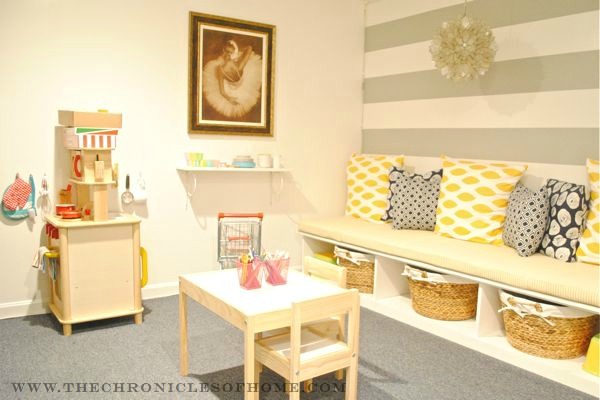 I set up a little kitchen area along the back wall of the room with the girls’ play kitchen.  I hung a few simple hooks on the wall to keep kitchen utensils organized.  The shelf and brackets were also a great bargain from Ikea.  The shelf holds all of the kitchen serving pieces. 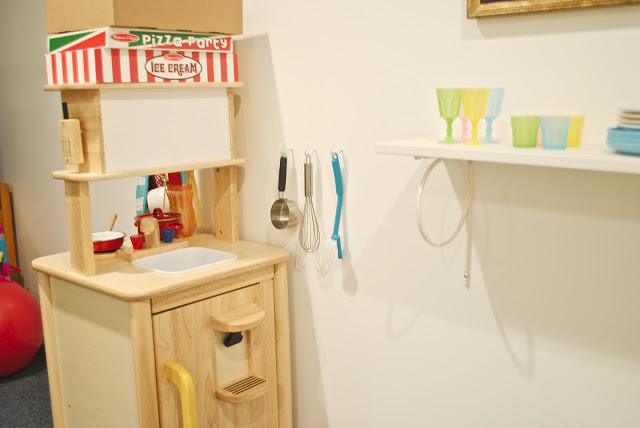 Ada was with me at Ikea and instantly fell in love with the colorful little cups, and at $3.99, I very happily brought them home for her.  Aren’t they adorable? 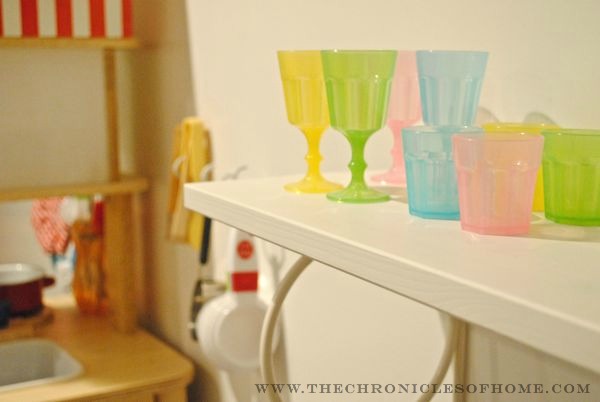 The built-ins were in great shape and really just needed a fresh coat of paint.  I bought some magazine files and cups and boxes at Ikea to help organize drawing supplies and organized the girls’ toys and games in their boxes on the shelves according to type. 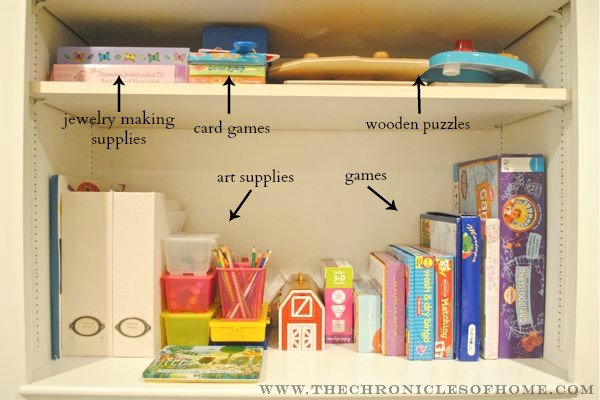 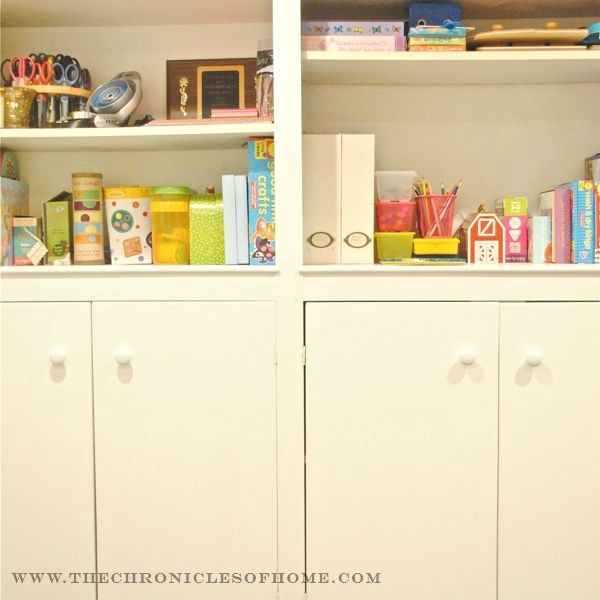 I put larger toys inside the cabinets. 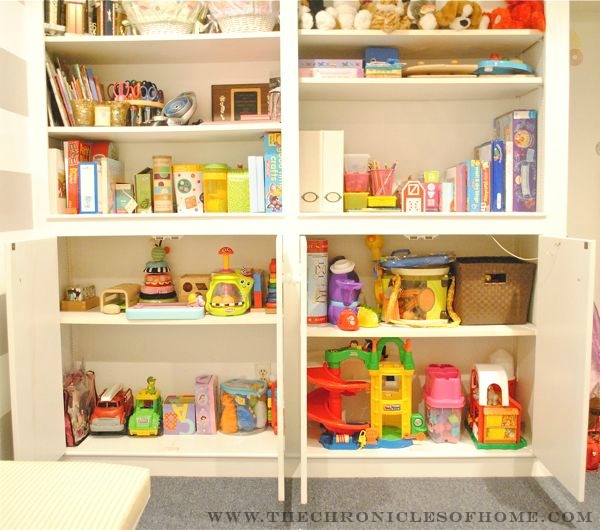 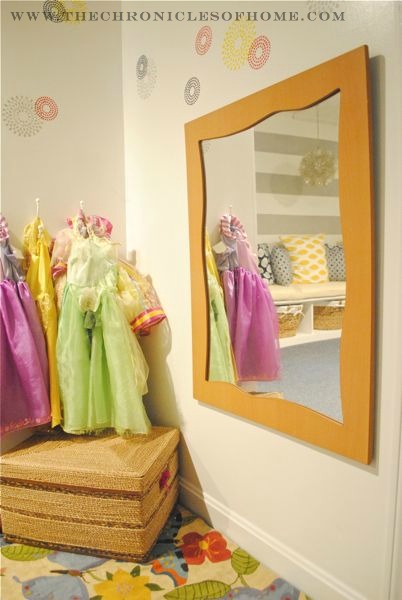 The playroom is everything I had hoped it would be.  My girls love using it and it feels warm and cozy and childlike without being babyish.  Their toys are all organized and accessible.  And I have my living room back.
The only little piece left is the space under the stairs.  I feel like there is some hidden potential there but I’ve yet to come across any ideas I love.  Well except for this:

pinterest
How awesome is that??  I would have loved this as a kid.  But I think I’m looking for something a little lighter-on-labor here.  Lately I’ve been thinking of some light curtains so they could still make a kind of fort, but could also be pulled aside to open everything up.  Anyone have a brilliant, whimsical, under-the-stairs idea to share??
« Living Room
Dining Room »