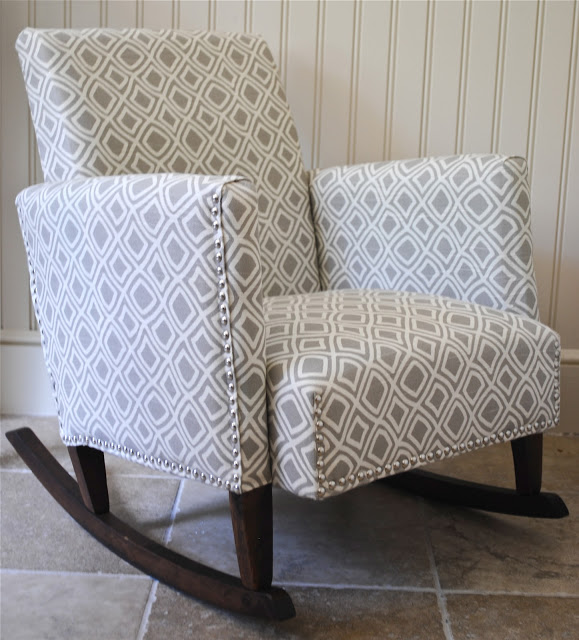 So my latest upholstery project here is DIYish and not plain DIY for a couple reasons.  First, I didn’t make the frame of the rocking chair.  Second, at some point I stopped taking photos of every step because I realized that no one project like this is going to be exactly like another one.  So I’m not giving you exact step-by-step instructions like I did for the upholstered bench, but a bit more of an overview on how you might go about something like this.  I did learn some useful tips that would apply to any project though, and here they are: 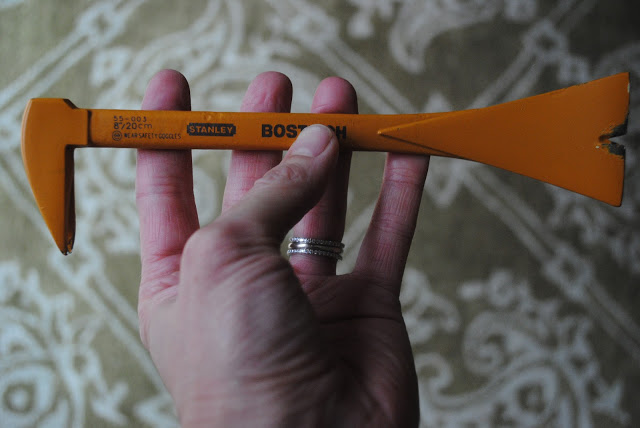 I have had pretty much a lifelong obsession with child-sized upholstered rockers.  I’ve mentioned before that my great-grandfather was an upholster…and man do I wish now that he had lived to 112 so he could have passed his trade to me!  As a first birthday gift to my mom, he made a child-sized replica of a full-sized dark green leather chair he also made.  Here I am, around 18 months, climbing into “my” (really my mom’s) chair. 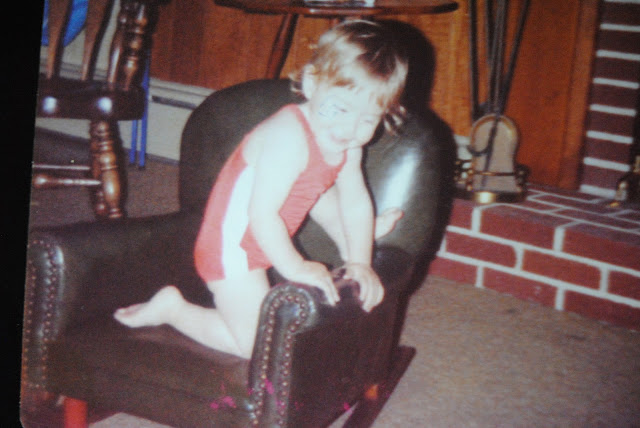 This chair has always been beloved in my parents’ house.  My mom loved it, I loved it, my brother loved it, every child who has ever passed through their house has been magnetically drawn to this chair.  And for Ada’s first birthday 2.5 years ago my parents brought the chair to an upholsterer and had an exact replica made for her first birthday.  Here it is. 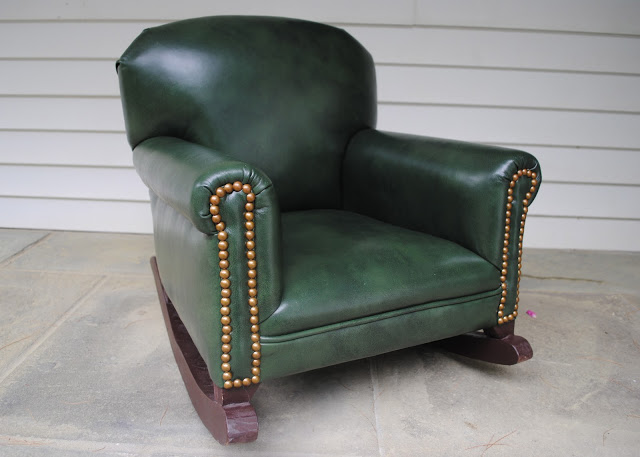 I will have a very hard time allowing her to take it from our house one day when she is grown because I love it.  But it’s hers.  And maybe by then I will be able to build another one for myself.
So, my point in all of this is that I have a deep-seated affection for miniature upholstered rocking chairs.  (I’m feeling like this could be a long post…)  About three weeks ago Scott returned from his trash run to the dump…that’s right, no trash pickup in our town, everyone hauls their own trash and recycling to the “Transfer Station.”  Not my favorite chore, and really, I have gone maybe three times in the five years we’ve lived here, but there is this little corner of the dump with a “swap shed” where people can leave things in workable condition and take things they see there and want.  So Scott comes home and says, “I think you should come back with me, there are some interesting things at the swap shed today.”  So I did, and was instantly drawn to this filthy, plastic-upholstered, miniature rocking chair. 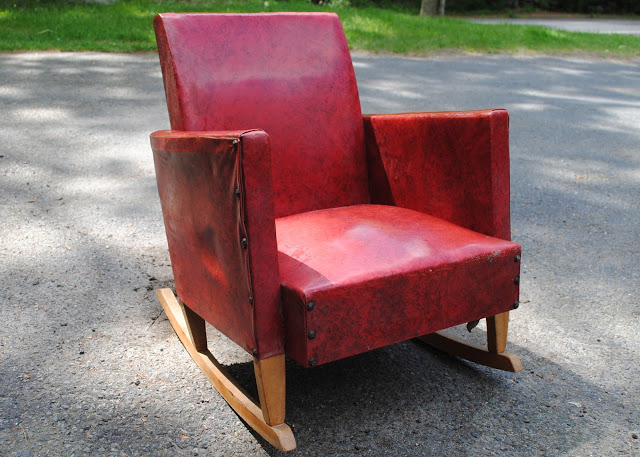 It was sturdy and had good bones and I was eager to try a more complicated upholstery project, so home with us it came.  Step one was cutting off the red plastic and taking it apart.  It was held together in various places with wood screws so it wasn’t much more complicated than unscrewing one-by-one (an electric screwdriver or drill with screwdriver attachment makes this process pretty easy).  What you see below is what I found after removing one of the arms – dirt, old pennies, rusted safety pins, mouse poop, and general debris.  This was my second least-favorite part of this project, behind the initial nailhead fiasco.  Just want you to be prepared for what you might find if you come across a similar project… 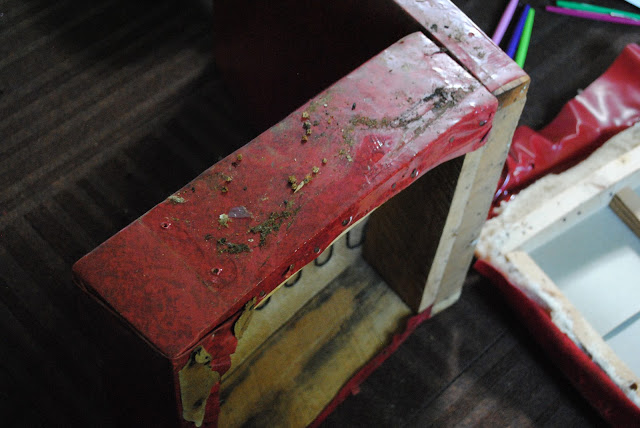 This is the back side of the chair back.  I thought it was pretty cool how roughly hewn the pieces were.  The bottom piece still has bark on it!  I so wonder who built this and for whom.  And, in case you are wondering, that is not one of children lying on the floor to the right of the chair, but an abandoned babydoll.  This is usually the way of things in my “studio.” 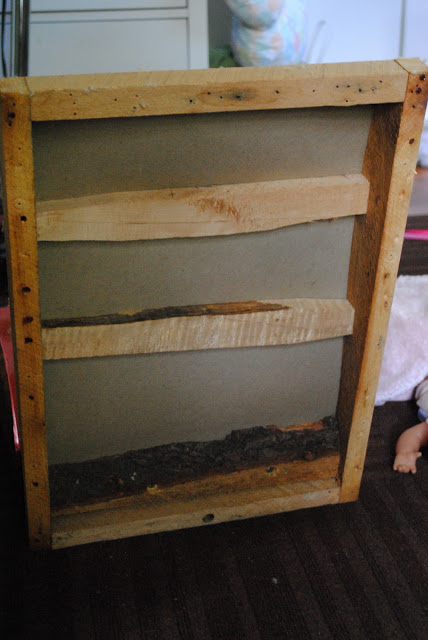 And here are the six components, all disassembled: a seat box with springs, back, two sides, and two rockers. 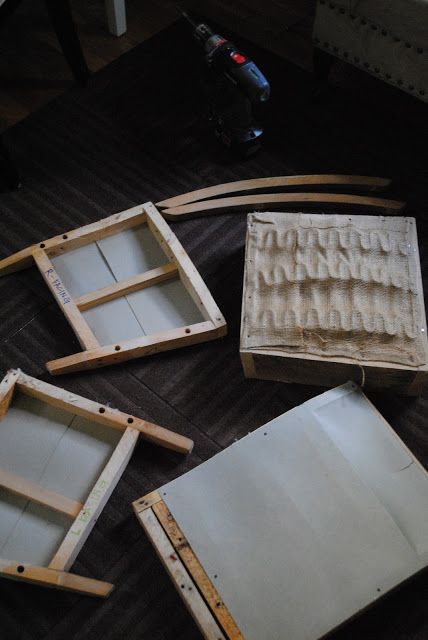 I stained the bottom rockers with the leftover dark stain (Rustoleum Wood Stain in Kona) I had from the upholstered bench.  I added a lot of padding and stuffing to the chair components, basically following the same process I did with the upholstered bench (click here if you don’t want to scroll up to the previous link) of foam and then batting wrapped tightly around the foam and stapled flat.  Here is the progression of the seat: 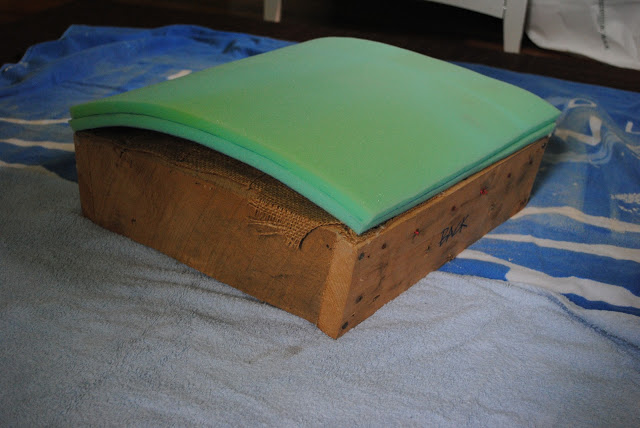 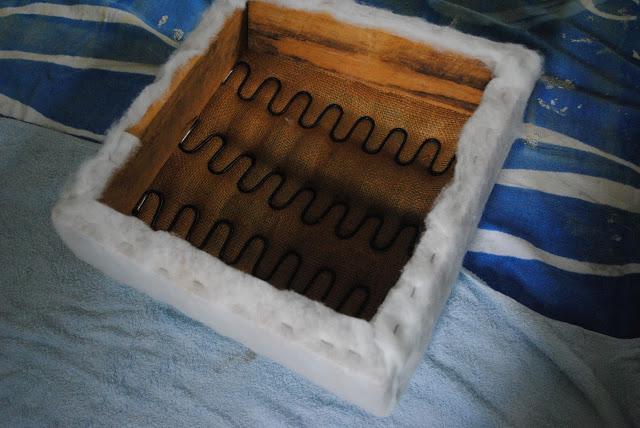 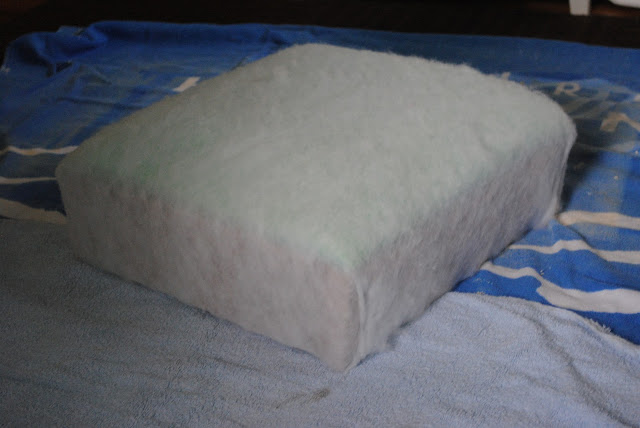 After the batting is in place it’s time to drape your fabric over and start playing.  As far as I can tell, there is no science to this.  Perhaps this is why having furniture reupholstered costs so darn much!  It is art, darling.  But, seriously, I draped the fabric over the seat and adjusted it so the pattern was fairly straight on all sides, then cut slightly larger than I needed so there was enough excess to pull and staple underneath.  Think of it as very similar to wrapping a present.  If you are a stellar present-wrapper, I think you can do this.  You want the fabric smooth, the edges and corners sharp and as flat as possible, and the fabric pulled very taut since it will stretch a bit over time. 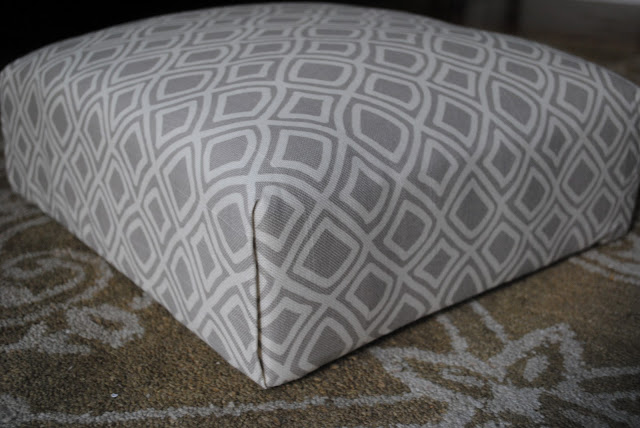 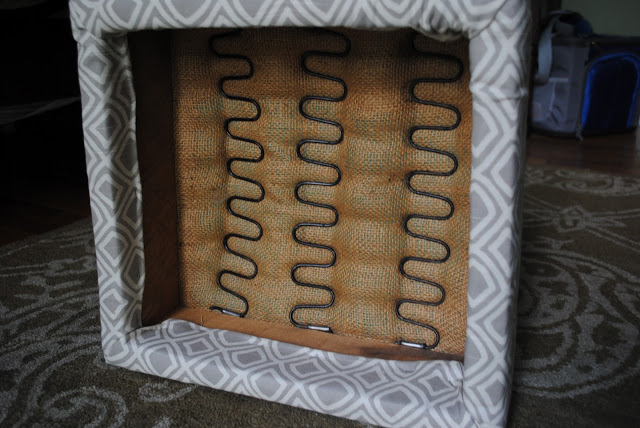 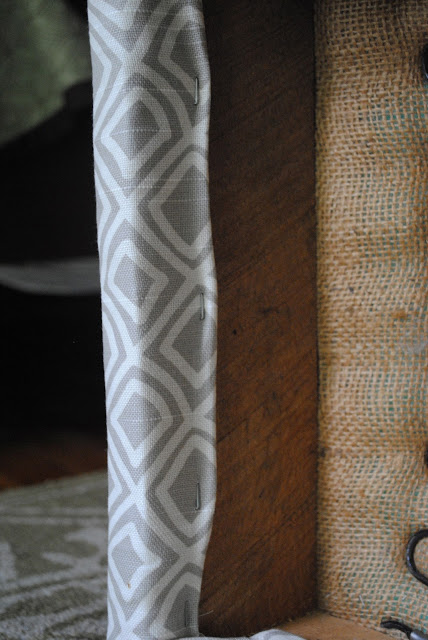 I continued on with the same foam, batting, and fabric process with the back and arms and then started to think about putting it all back together.  Which was a bit of a mistake because I forgot about the screws and had to undo some of the fabric to put the screws underneath it.  Again, there’s no exact process here, you just have to pay attention to how it all came apart and then recreate that backwards to reassemble.  You wrap most of the fabric before the screws and then finish it after they are in.  Here are some shots of the chair almost complete, just missing the nailheads and bottom rockers. 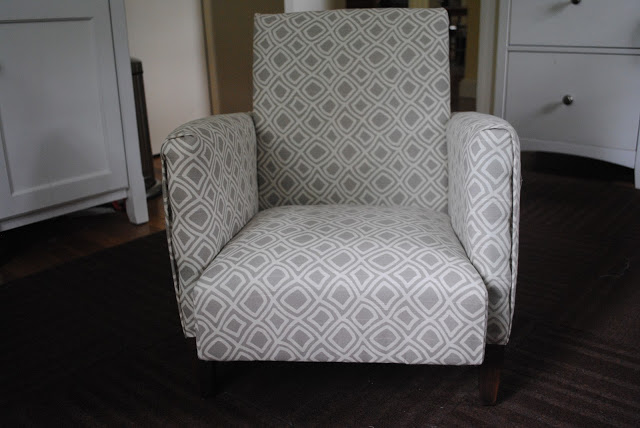 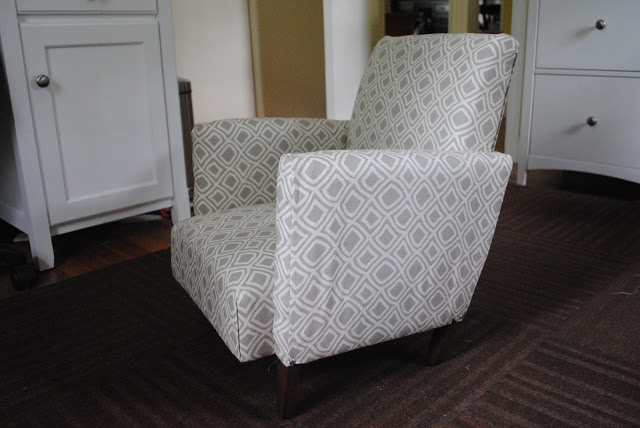 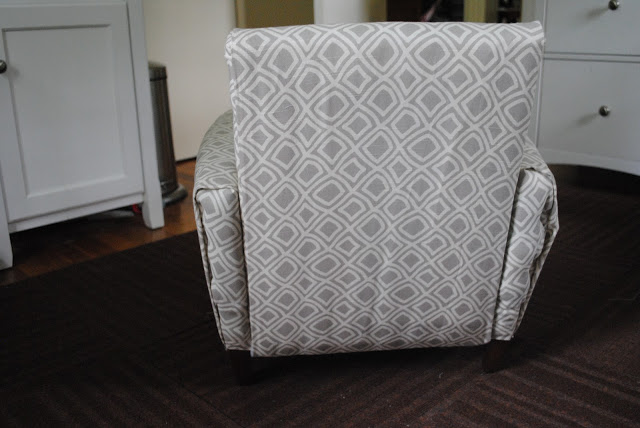 You can see in the above photo especially how the fabric gaps at the edges but this is where the nailheads serve their perfect dual purpose of being both beautiful and exceedingly practical.  Based on where the fabric had open seams and with an eye to consistency, I decided to put nailheads along the sides and bottom of the back, sides, and front of the chair.  This part took for.ev.er. because of the nailheads I started with but moved along more quickly once I got the sturdier ones.  I marked dots for where the nailheads were to go 1/2″ apart.  There is some pulling and flattening and lining up to be done here too because you want the fabric edges and nailheads to follow the outer lines of the furniture.
Many swings of the hammer later, here she is, my friends.  Pretty vast difference, huh?

My plan all along has been to sell this when I finished it.  But, of course, now that I am done I am sort of in love and don’t really want to.  But I think I still will.  I figure it will keep me motivated to take the next step and combine my understandings of woodworking and upholstery to try building a frame and then upholstering it, thus building an entire chair from scratch.  At any rate, I think I will hold onto it at least another week so I can look at it and sigh for just a little longer… 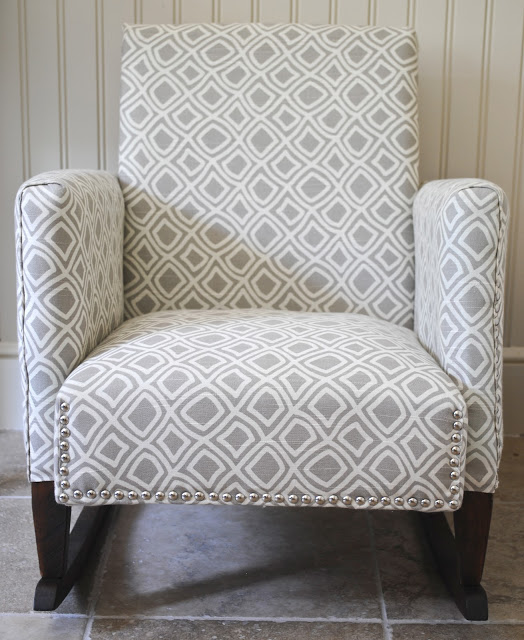 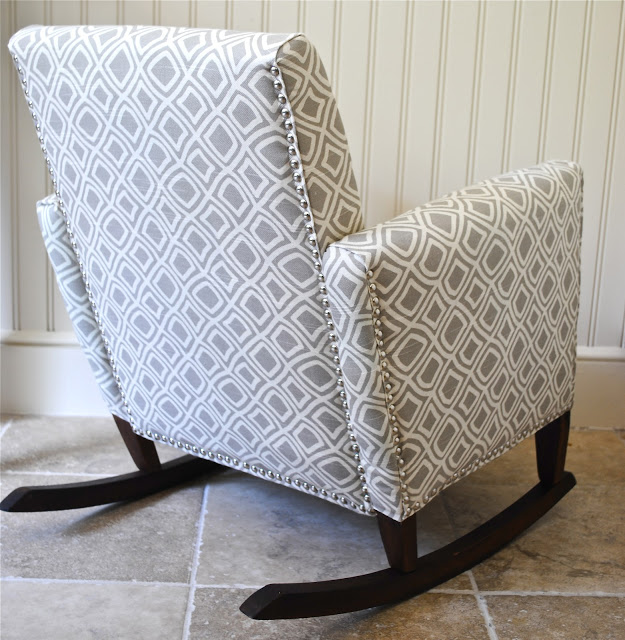 Linking this project to My Uncommon Slice of Suburbia!