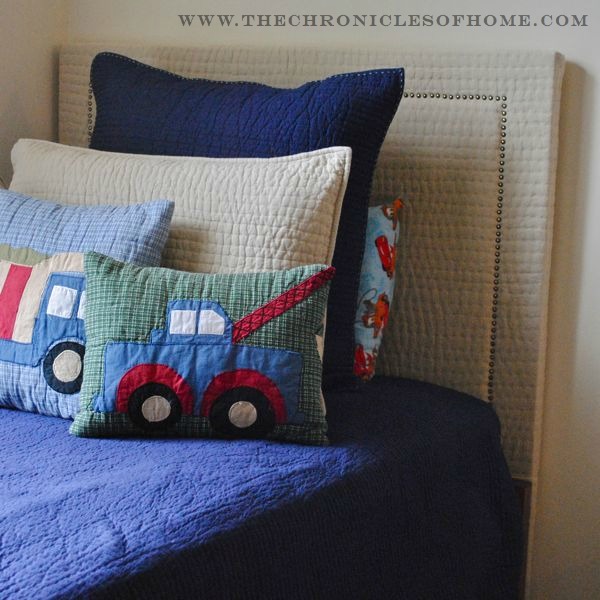 Continuing on with my work on my friend’s sons’ bedroom, I finished the DIY upholstered headboards with nailhead trim for their twin beds.  Karen wanted a soft fabric and chose a pickstitch quilt to use as the upholstery fabric, which worked out great because I was able to cut out a typical step in making upholstered headboards.  Usually there is a layer of batting wrapped around the headboard underneath the fabric, but since the quilt was made of two layers of fabric with batting in between, I was able to skip the batting step.

This was my first time making upholstered headboards and I was surprised how relatively simple it was.  Remember that the wood cuts below are for making two twin headboards.  If you’re making one, just half everything.

I purchased a piece of plywood from Lowes and had it cut in the store into two boards, each measuring 30″ x 42″.  I also bought three 3 1/2″ wide pine planks, 8′ long each.  When I got home I cut the planks into six pieces: four pieces 47″ long and two pieces 35″ long.  I used 1 1/4″ wood screws to attach the pine planks to the plywood as shown below. 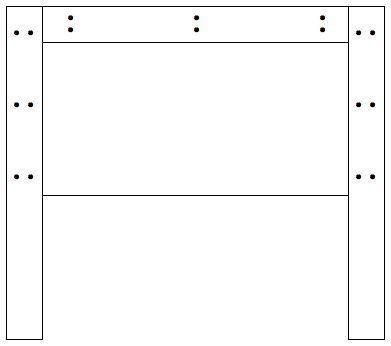 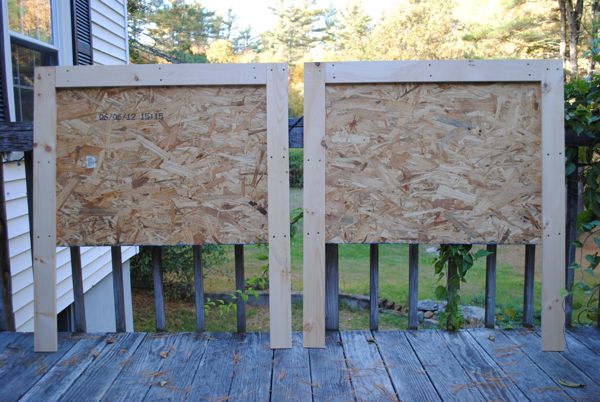 I then lay 1″-thick high density foam across the plywood between the pine planks and cut it to fit the opening. 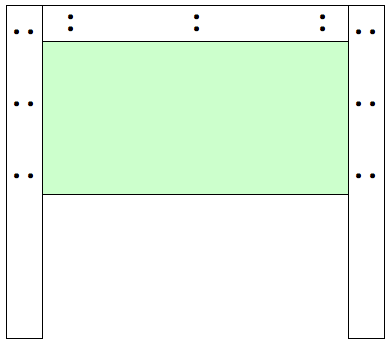 I attached the foam to the plywood using a staple gun. 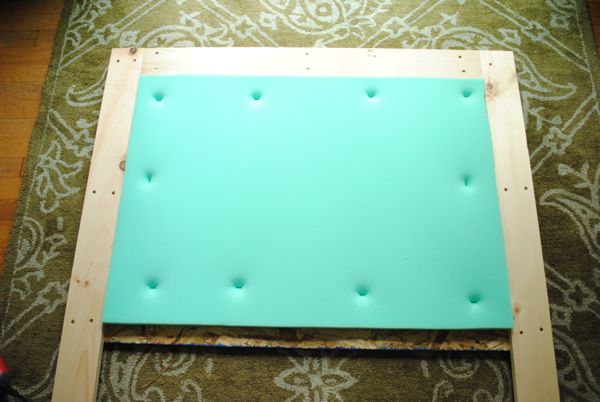 I cut the quilt I was using for fabric a bit larger than the plywood and lay it upside down on the floor, then lay the assembled headboard on top of the quilt, foam side down. 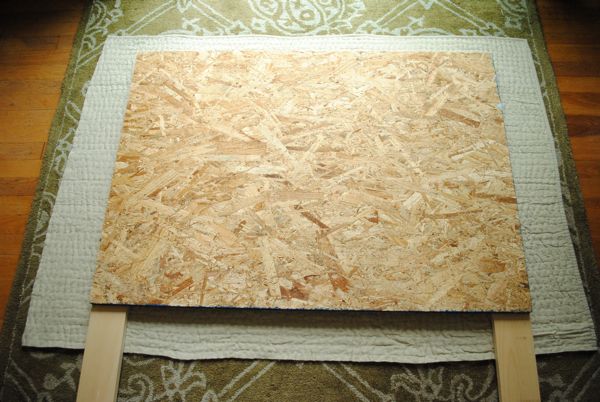 I pulled the top of the fabric over the top of the headboard and stapled it to the back side of the plywood.  For the corners, I folded down from the top and put one staple in the side. 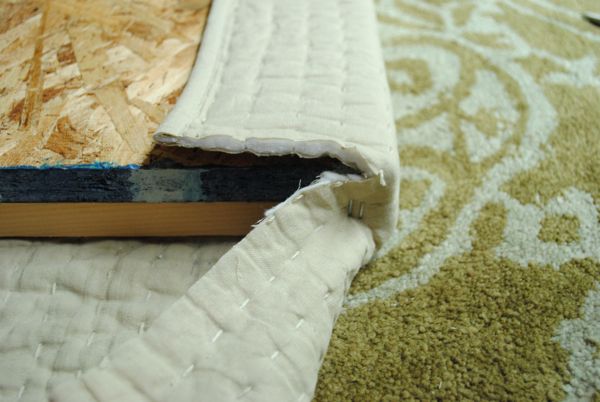 Then I cut a rectangle of fabric away to cut down on excess bulk. 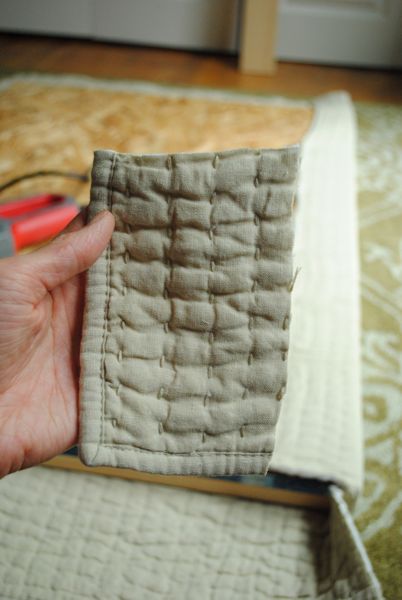 Finally, I folded and pulled the remaining fabric across and stapled to the back for a smooth folded edge. 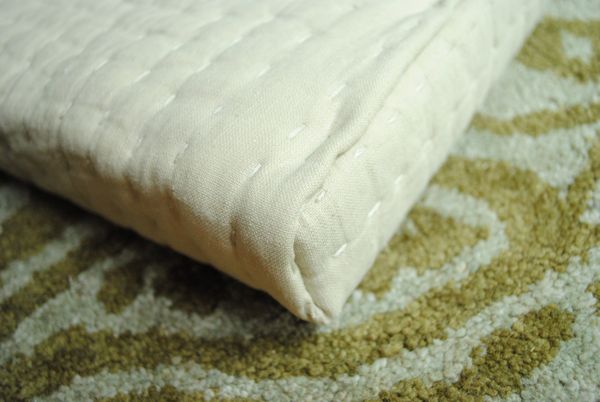 I repeated the pulling and stapling with both sides.  For the bottom, I cut a notch along the line of each leg and pulled the fabric in the middle around to staple to the back of the plywood. 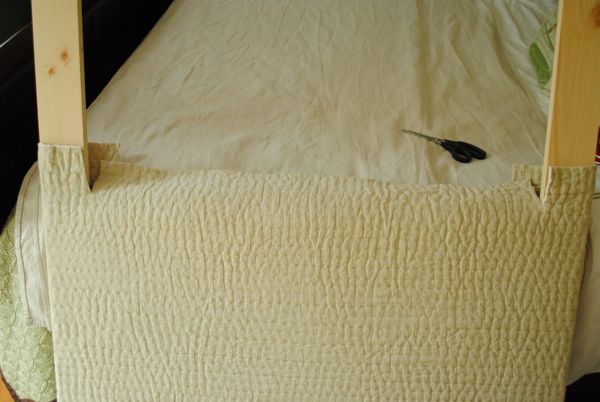 For the legs, I cut a rectangle of the quilt wide enough to wrap around each leg and a bit longer than each leg.  I folded under the rough edge at the top and pulled the fabric taut to wrap it and staple along the back side of the leg. 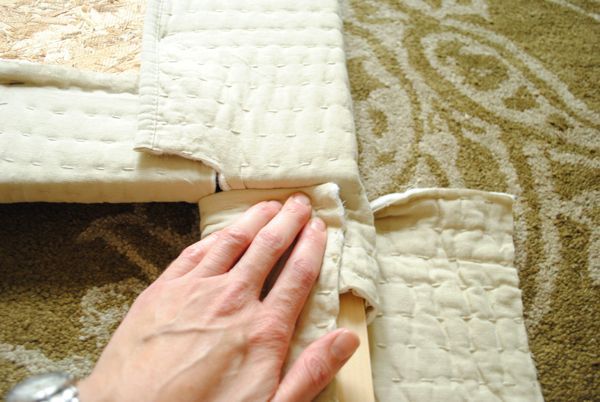 I stapled the fabric to the leg at intervals the whole way down, then snugly wrapped the other side over, tucked the rough edge under, and stapled it to the leg. 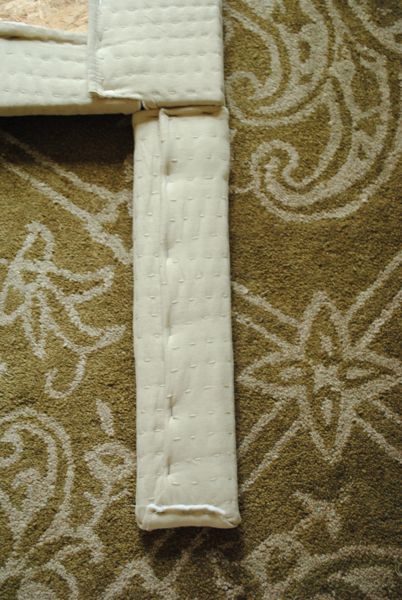 For the bottom I folded the fabric like a present and stapled to the back.  I repeated with the other leg before moving on to my second headboard. 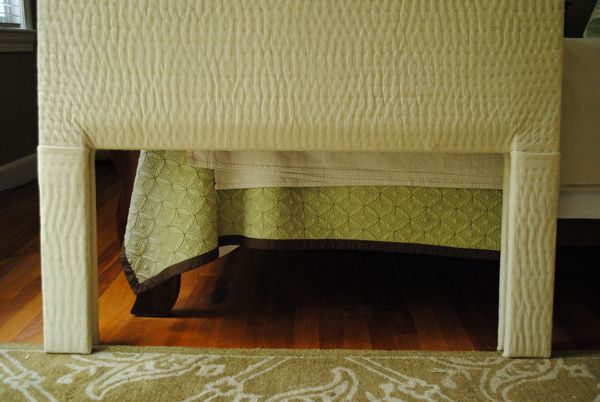 Those seams where the leg covering meets the top part of the headboard will be hidden by the bed.  I covered the legs just to give the whole thing a finished look if any of the legs peek out on the side of the bed.When both headboards were complete I used a large ruler to mark dots 1/2″ apart close to the inside edge of the pine plank underneath the fabric. 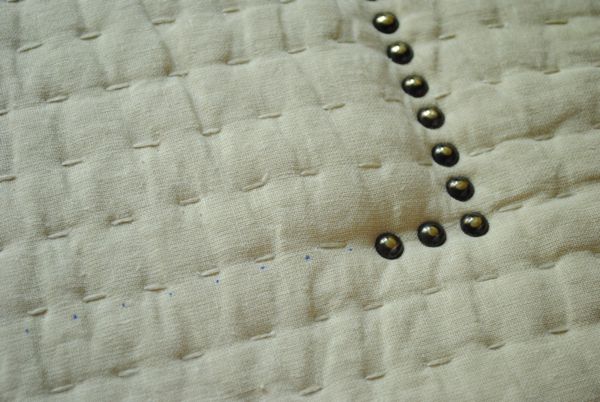 I’ve seen a lot of headboards done with nailhead strips instead of individual nailheads but I wanted the look of real nailheads so took the time to hammer them in individually.  It went so much more quickly than I expected, likely because the pine I was hammering into is a soft wood so the nailheads sunk right in with a few taps of the hammer.

One of my little “helpers” came in about halfway through my applying the nailheads on the first headboard.  She tested the cushy-ness of the headboard, tapped a few already-embedded nailheads with my hammer, and then wandered off for a snack with her Daddy. 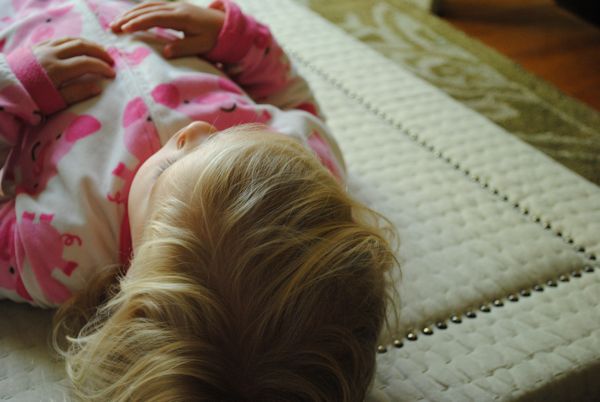 I’d say the whole project (two headboards) took me two hours or less, which was much quicker than I anticipated…always a nice surprise!Here are a few shots of the headboards in place in the boys’ room. 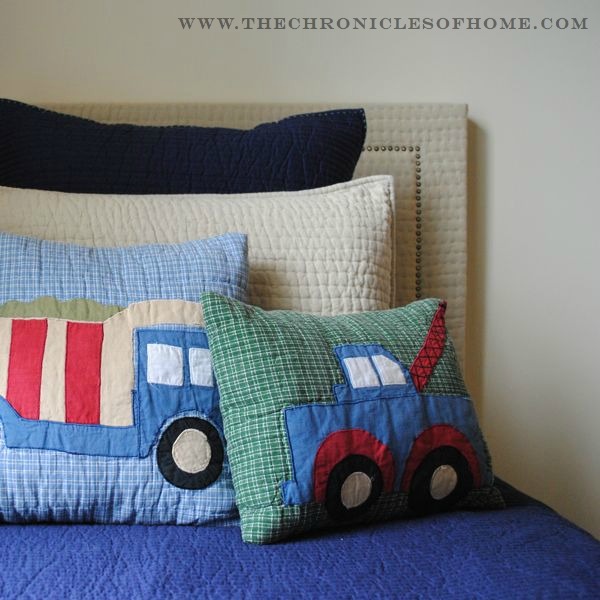 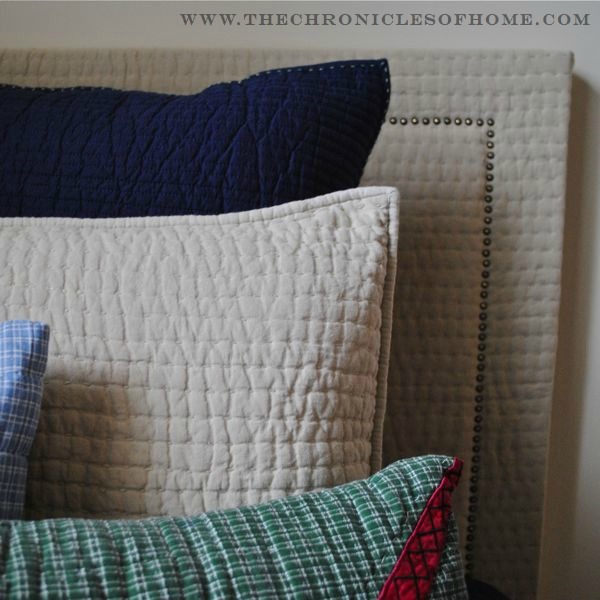 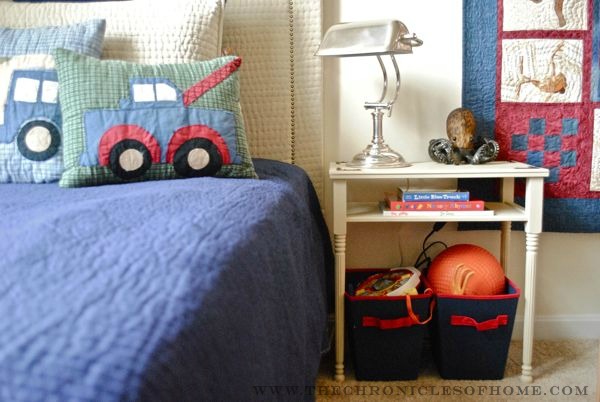