Remember that flower arranging class I took a few weeks ago?

Earlier this week I went out into my yard and gathered up lots of seasonal clippings – spruce, holly, boxwood, winterberry – and happily lay it all, plus some pretty variegated greenery I picked up at Trader Joe’s, out on newspaper on my kitchen table, certain I was now equipped with some skills to put together a killer pre-Christmas arrangement. 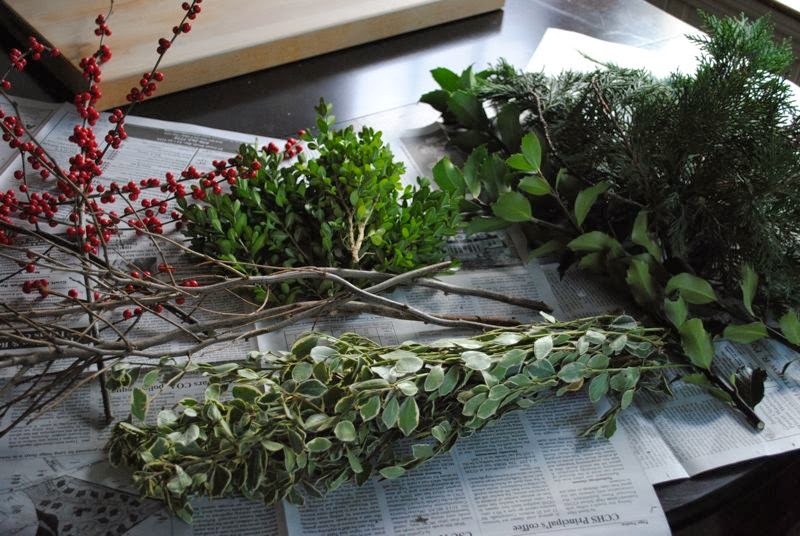 And I think it was coming together alright as I followed some of the steps I’d learned.

First spruce to set the base of the arrangement,

then the variegated leaves and holly to set the height, 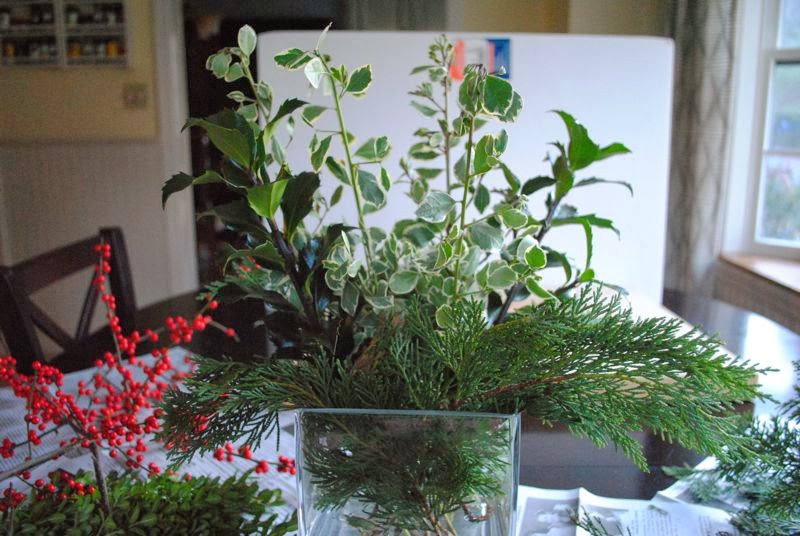 followed by the winterberry, which I was thinking of as the focus of the arrangement. 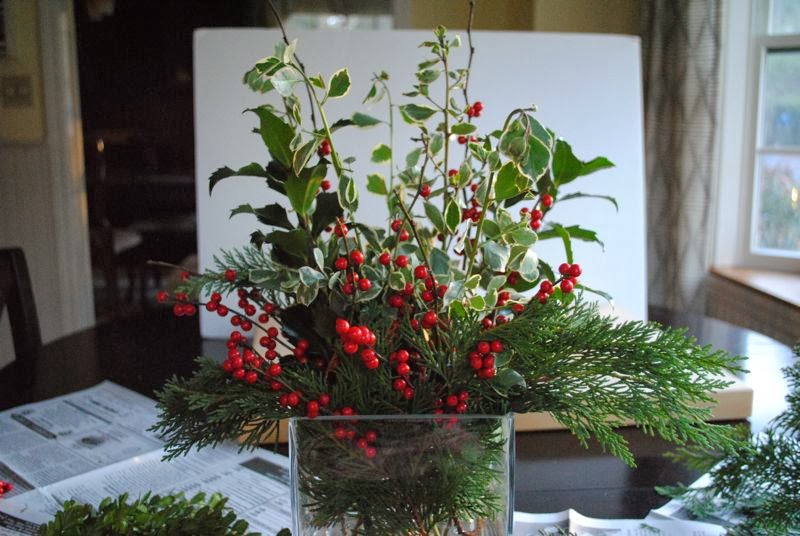 I tucked in the boxwood stems to fill in any gaps and add fullness. 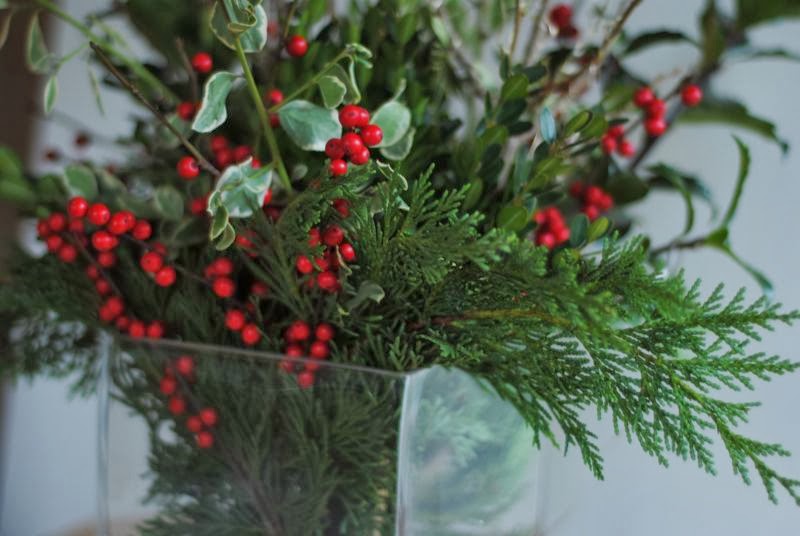 And then…I had this great idea to take some bare branches and wrap them with wired LED lights to really give everything that special holiday sparkle. 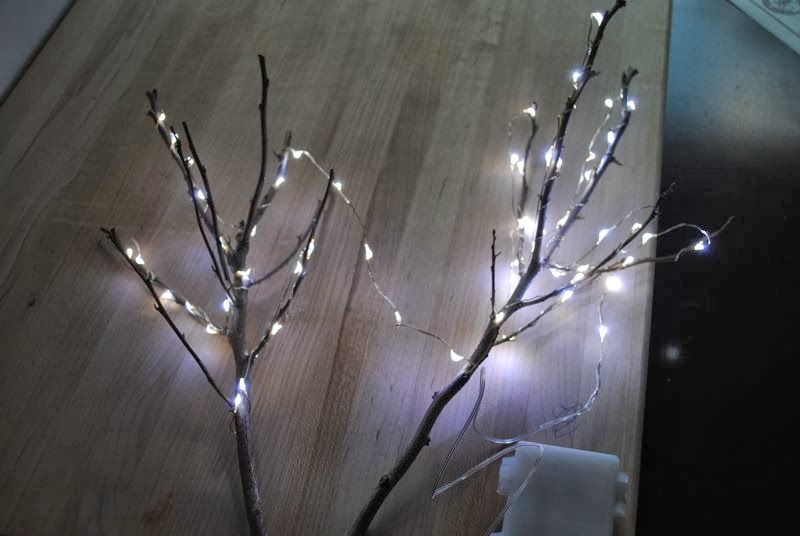 This, my friends, is where things went awry.

Up close, it was just what I’d pictured in my head – natural greenery, a pop of Christmas red, some festive light in the background. 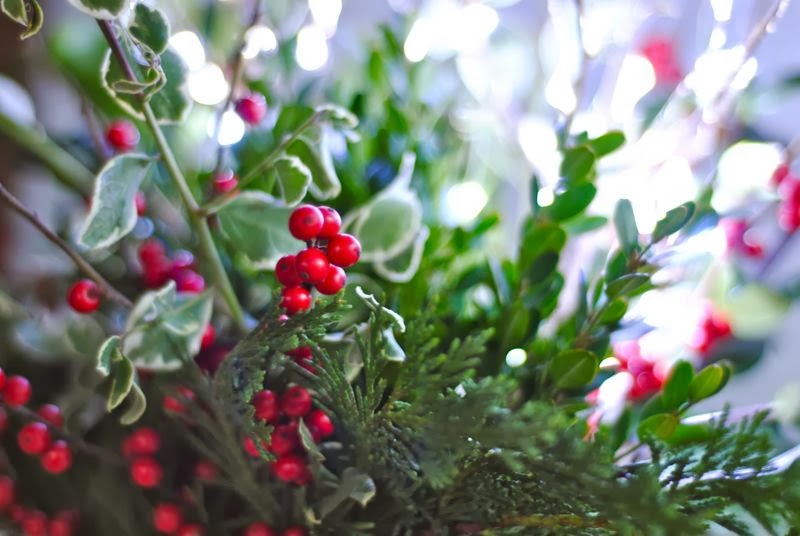 But take a step back and…well…not so much. 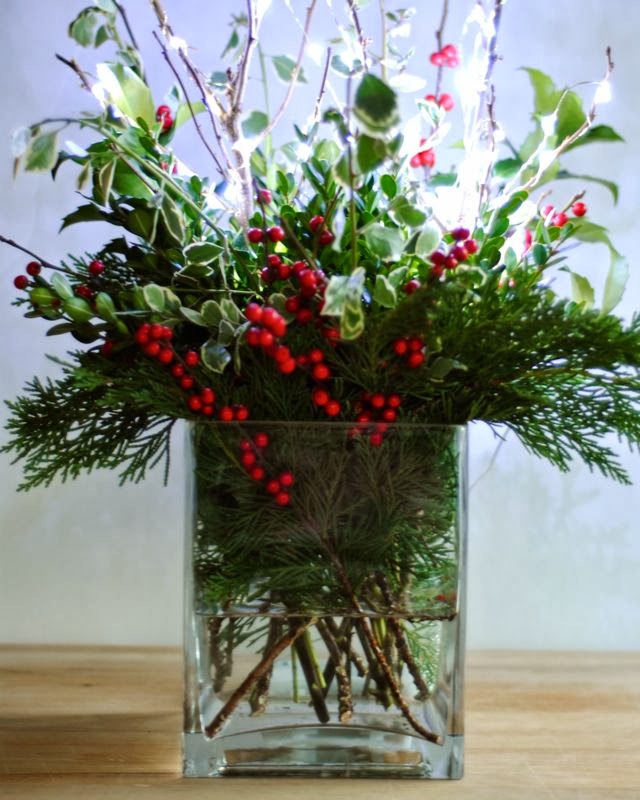 The whole thing comes off kind of garish – lights too harsh, too concentrated in one spot, and instead of really bringing out the greenery and berries the light just kind of distracted from it all.  It reads “Vegas Neon Christmas!” which is not exactly what I was going for here.

Since we were leaving the next morning for Thanksgiving in Pennsylvania, I didn’t have time to fiddle with this further, but I’ll be giving it another shot next week, and I hope I’ll come up with something I can use as the centerpiece for the Holiday House Tour, which is happening next Saturday.

I’ll be wrapping things up for the tour next week and I cannot wait to show you everything I’ve been making and putting together – there are ornament garlands, miniature forests, paper stars, sequined and fur pillows, table settings, etc.  I’ve been a busy little Christmas elf and you can expect lots of Christmas decorating ideas these next few weeks!

I have a super busy week ahead – finishing up the Holiday House, preparing for a (small) birthday celebration for my daughters next weekend, and closing on our new house next Friday (yipeeeeee!).  More details to come on all of this later.  Hope you have a happy weekend!

* * * * * * *
I’m thrilled to be working with Haagen-Dazs as a DIY brand advocate on their “Moment for Me” campaign.  The campaign is all about recognizing and appreciating little moments we grab for ourselves in our busy lives.  Even though my little arrangement here was only experimental, it was a nice opportunity for me to grab a moment for myself to work on my flower arranging skills.  They provided me with the beautiful glass vase from Pottery Barn and a gift card to Pier One, which I used to purchase the LED lights.  I’m so happy to be part of such a positive campaign!
All opinions are my own.  This is not a sponsored post.
« Sick Soup
Pulled Beef and Butternut Chili »