Last week I showed you a couple of updated details in the kitchen – how I added custom moulding to the ends of my kitchen island and why I removed gas and installed an induction range instead. Today I’m sharing the last piece of the main kitchen updates I’ve made over the past two years – how and where I added a built in wine fridge and beverage fridge in the kitchen. (I’ve linked all the posts about the kitchen updates at the bottom of this post.) 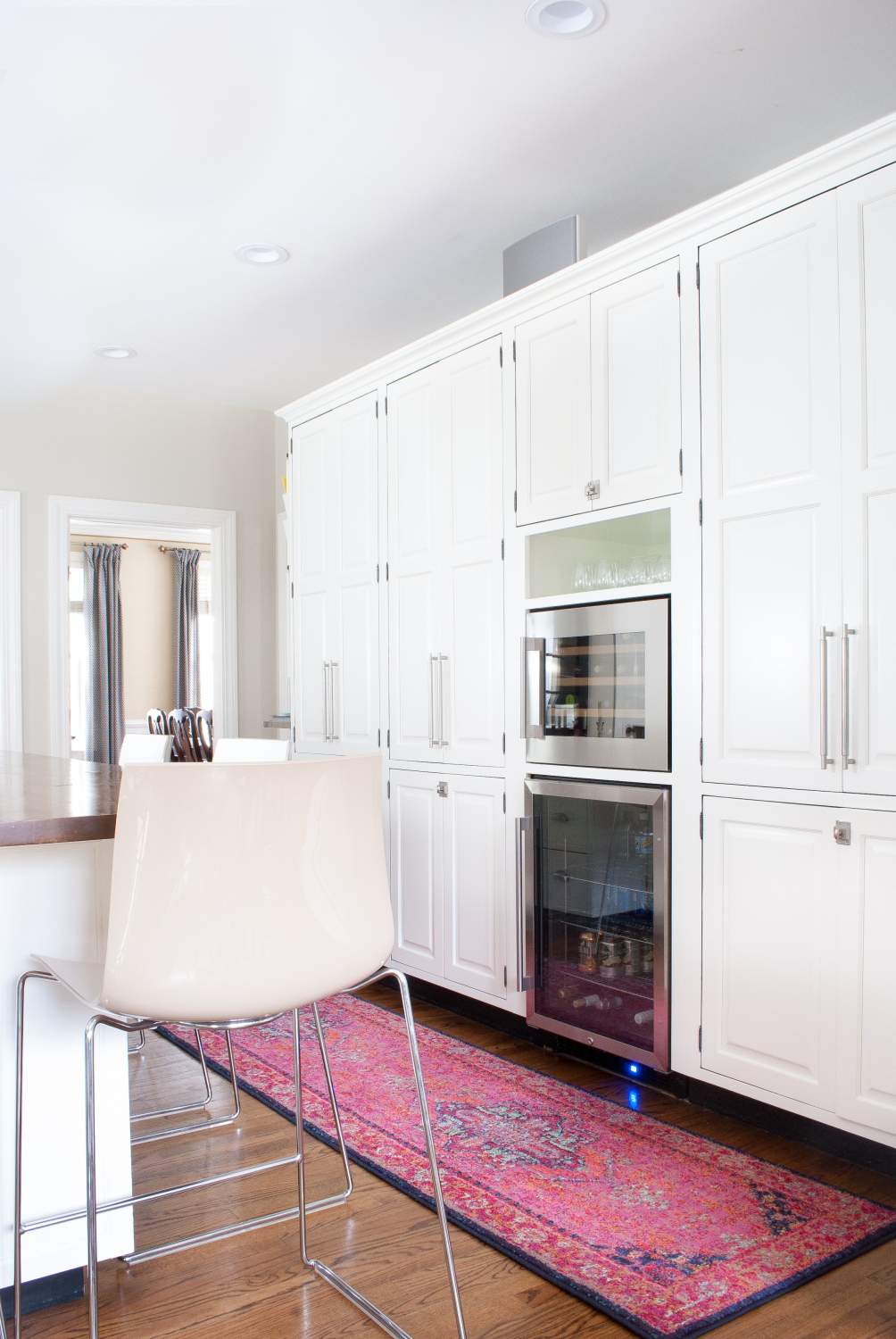 When I decided to put a full range in where there had been just a cooktop in the kitchen island, it rendered the double wall ovens on the far side of the kitchen obsolete. And I had wanted to remove them anyway – the black blended nicely with the original black cabinets but they just stuck out like a sore thumb once the cabinets were painted white. You don’t get the full effect here of how stark the black was against the white, but in person it really looked like those ovens did not belong. 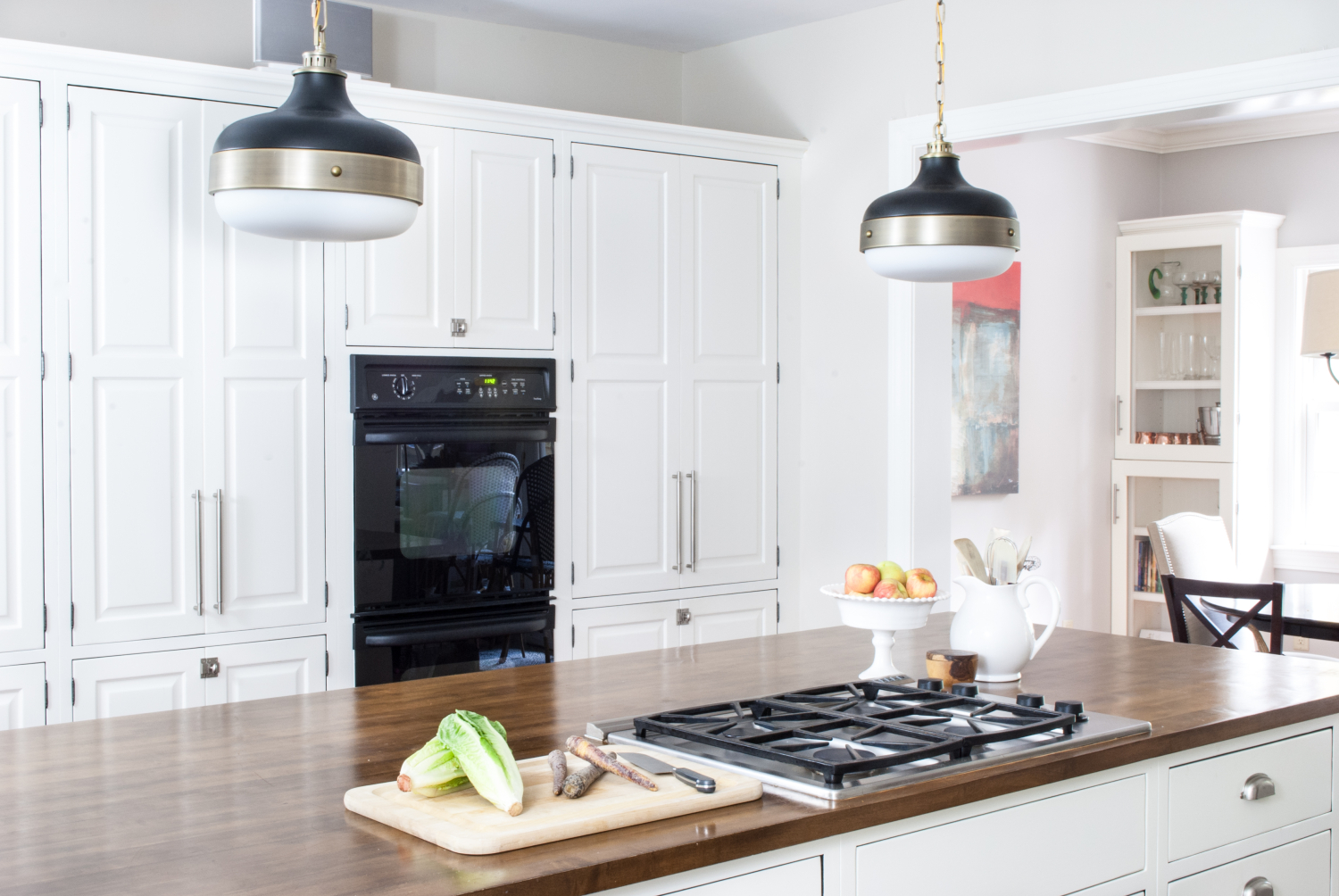 So I pulled them out. I was even able to sell them for a couple hundred dollars on Craigslist – the unit was probably 15 years old but still worked fine. I always had a wine and/or beverage fridge in mind for that space where the ovens were and I spent hours poring over options once the new induction range was installed. With the large opening left behind after the ovens, I had plenty of space for both a wine and a beverage fridge but finding two that fit together proved a little challenging. Retail chillers are better at cooling beverages than wine chillers, so I was going to keep wine in the chiller and beers in the fridge. Ultimately, I chose this small wine fridge – it says it fits 28 bottles but I’ve found the capacity to be more like 20-22 bottles, which is still plenty of room for us. I’ve been storing red wine in the wine fridge at 57º, which is the perfect amount of chill for me. I also added a beverage fridge underneath, where we keep beer, white and sparkling wine, sparkling water, and soda. I drink almost nothing but water most days but like to have some of the other drinks on hand for the occasional treat or when we have friends over. 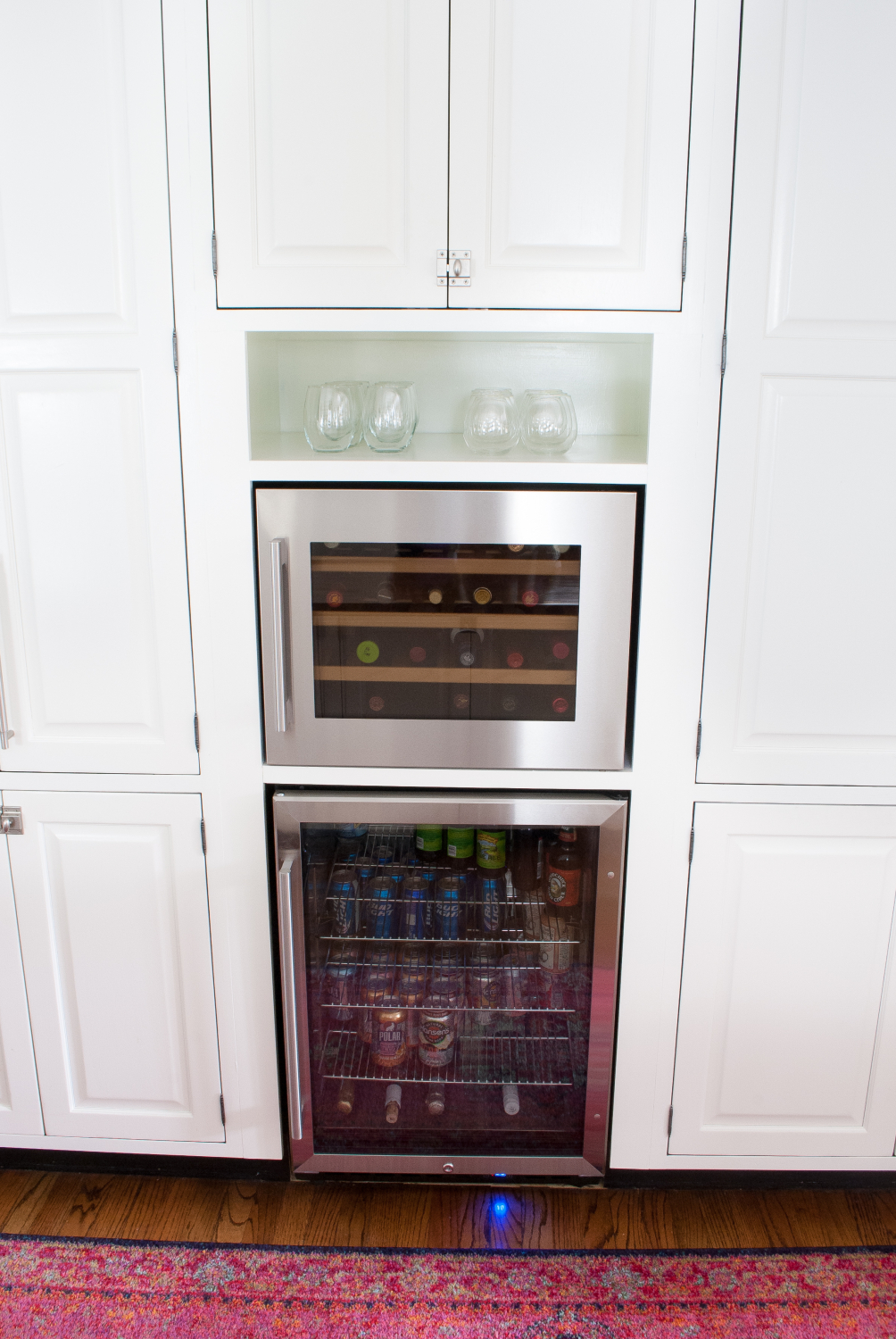 I worked with a local carpenter we have known since living in our first house, and he suggested adding the shelf in between the wine and beverage fridges, and then we had a little extra room at the very top for another small shelf. He did a beautiful job adding trim around the opening to make the fridges look like the opening was always meant for them rather than a retrofit job. 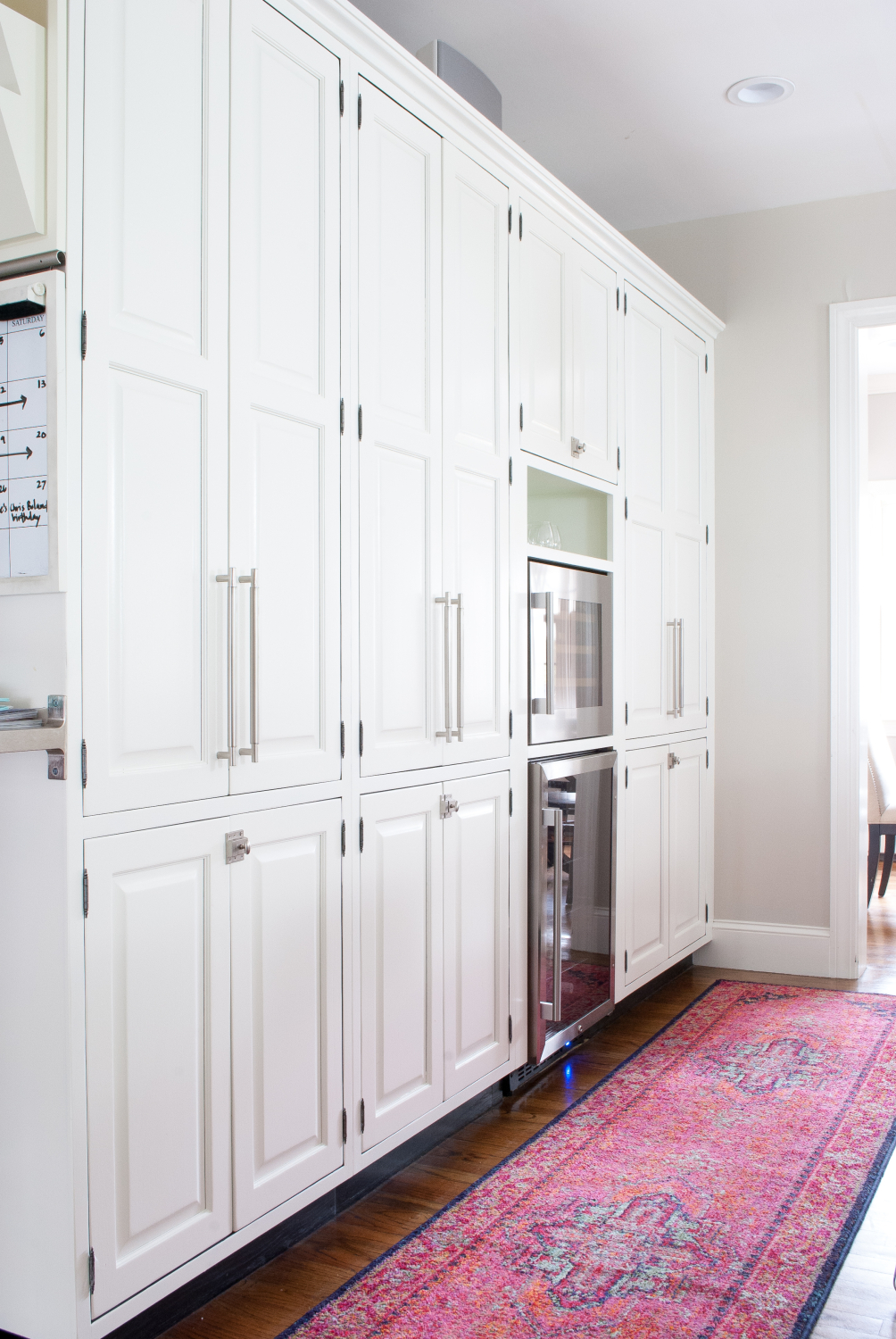 The wine and beverage fridges aren’t part of an appliance suite so I was rolling the dice a little when I ordered them but their handles are exactly the same, which makes them look like they are meant to go together. I love how they echo the shape and scale of the large pulls I added to the upper cabinets on this wall too.

All that remains on my master plan to-do list for the kitchen involves the back eating area, but with the addition of these fridges, the main part of the kitchen is complete, after two years! I have been loving cooking and entertaining in my facelifted, more efficient, and brighter kitchen. 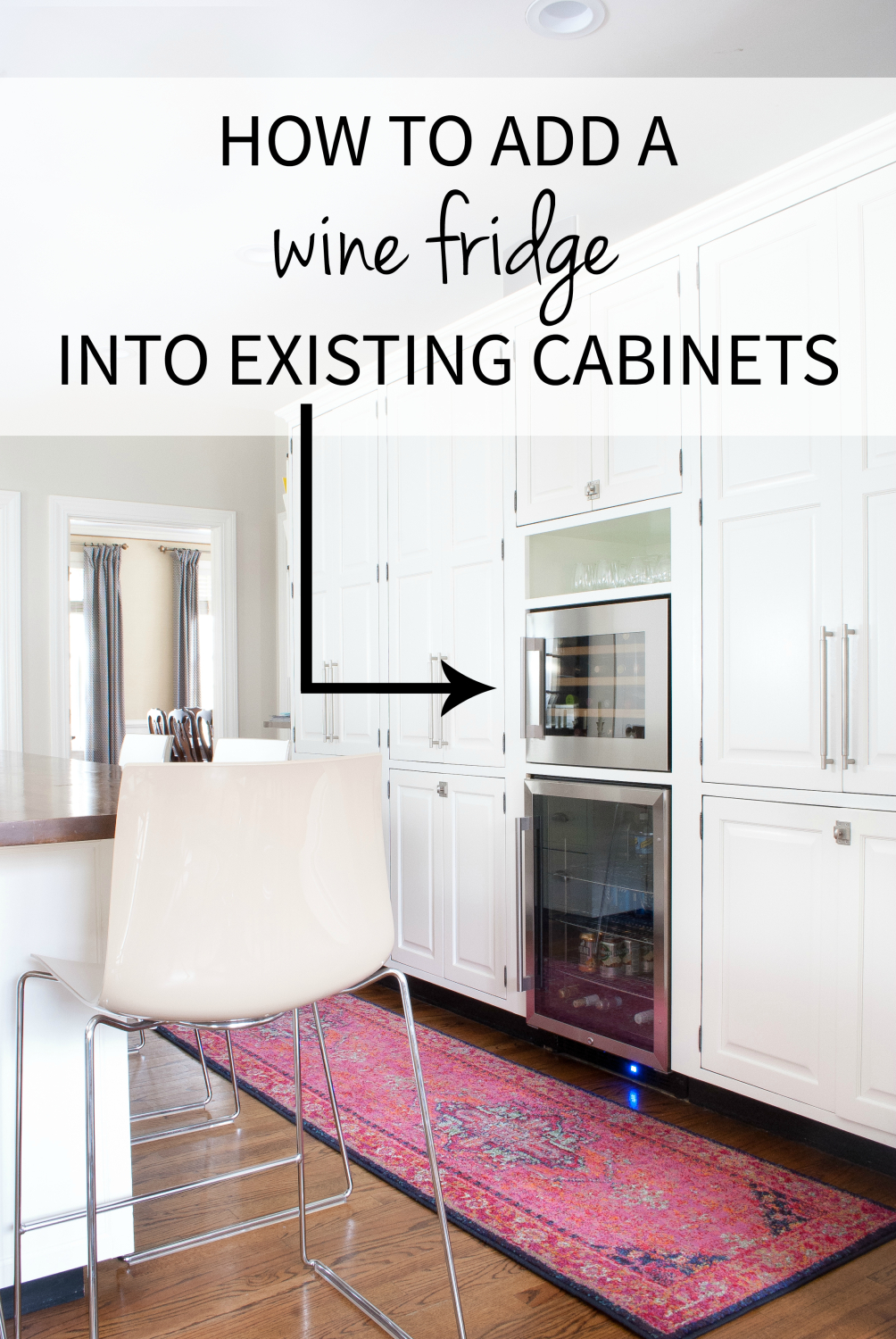 You can see all the changes that have happened in the kitchen over the past two years here:

After such a long renovation, I certainly have some thoughts on doing a kitchen this way, and I’ll be back tomorrow with some general thoughts on this whole process.